From the RuneScape Wiki, the wiki for all things RuneScape
Jump to: navigation, search
Loading...
IIIIII

The Prototype colossus is a smaller pet version of the Saradominist colossus, a golem from the Battle of Lumbridge. It can be bought from the Solomon's General Store for 1083 RuneCoins for free-to-play, or 975 RuneCoins for members. 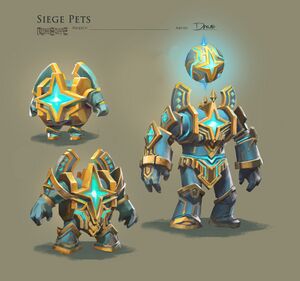 The update history project is a work-in-progress – not all updates to this topic may be covered below. See here for how to help out!
Retrieved from ‘https://runescape.wiki/w/Prototype_colossus?oldid=35359970’
Categories:
Hidden categories: