From the RuneScape Wiki, the wiki for all things RuneScape
(Redirected from Protean bars)
Jump to: navigation, search
Item JSON: {"edible":"no","disassembly":"no","stackable":"yes","stacksinbank":"yes","death":"always","name":"Protean bar","bankable":"yes","gemw":false,"equipable":"no","members":"no","id":"31350","release_date":"12 May 2014","restriction":"microtransaction","release_update_post":"Return to Ashdale & Choose Your Path","lendable":"no","destroy":"Are you sure you want to destroy your Treasure Hunter prize? You cannot reclaim it!","highalch":false,"weight":0,"lowalch":false,"tradeable":"no","examine":"This is a stackable bar that can be worked for Smithing XP based on your Smithing level.","noteable":"no"}

Protean bars can be won on Treasure Hunter, and could be claimed as a reward from various seasonal events such as the Christmas Advent Calendar and various promotions such as the Yak Track. They can be used on an anvil to do Protean smithing, which gives experience but no items. They were previously available to members only, but became available to free players on 24 April 2015.

60 protean bars can be used at once in the Make-X interface. Each bar takes 7 ticks (4.2 seconds) to be smithed, which means that 60 bars take 4 minutes and 12 seconds to use. At 857 bars per hour the experience is greater than some methods. Having the Rapid perk active on an augmented crystal hammer will speed up the rate the bars are used, thus increasing XP/hr.

The bars are stackable, subverting the need for banking. If you attempt to boost your level from one range to the next (e.g., 9 to 10) you do not get the option to make the higher level protean smithing item.

Protean bars, as with all protean items, can be converted at a 3:2 ratio into other protean items. Players are unable to use these bars within the Construction skill; only protean planks may be used. Protean Bars do not yield respect within Artisans' Workshop. 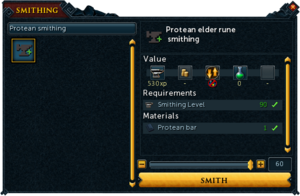 The Make X interface while using Protean bars for smithing

The update history project is a work-in-progress – not all updates to this topic may be covered below. See here for how to help out!
Retrieved from ‘https://runescape.wiki/w/Protean_bar?oldid=35292068’
Categories:
Hidden categories: