From the RuneScape Wiki, the wiki for all things RuneScape
Jump to: navigation, search
"Protea" redirects here. For the items won from Treasure Hunter, see Protean items.
Protea flower? (edit)

A protea flower is an equippable hunter-related item obtained from the Big Chinchompa Distraction & Diversion. Having no stats, it is a purely cosmetic fun weapon. During the D&D it is used to help attract moths that are then automatically caught in your jar. It appears to attract only the best moth the player is able to catch.

You can buy the flower in Mieliki Tapio's rewards shop in exchange for Competence Points, but it is free to pick in any big chinchompa cave. 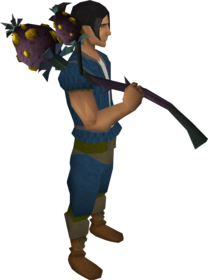 The plant from where protea flowers can be picked