From the RuneScape Wiki, the wiki for all things RuneScape
Jump to: navigation, search
Item JSON: {"edible":"no","disassembly":"no","stackable":"no","stacksinbank":"yes","death":"always","name":"Prized prismatic pendant","bankable":"yes","gemw":false,"equipable":"no","members":"yes","id":"25469","release_date":"13 November 2012","restriction":"limited","release_update_post":"Squeal of Fortune: Prize Refresh & Prismatic Pendants","lendable":"no","destroy":"Are you sure you want to destroy this item? You cannot reclaim it.","highalch":false,"weight":0.007,"lowalch":false,"tradeable":"no","examine":"Can be changed into a prized pendant for any skill.","noteable":"no"}

Selecting Archaeology will result in the pendant simply vanishing. 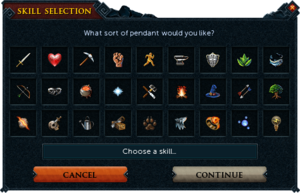 Greyed out skills on the choice screen.

This information has been compiled as part of the update history project. Some updates may not be included - see here for how to help out!
Retrieved from ‘https://runescape.wiki/w/Prized_prismatic_pendant?oldid=35407706’
Categories:
Hidden category: