Prince Ali of Al Kharid has been kidnapped by the scheming Lady Keli. You are hired to stage a rescue mission.

The starting point for the quest.

Talk to Chancellor Hassan, found pacing in the largest room of the Al Kharid palace. If asked if he needed any help, he directs you to a shifty-looking fellow, who goes by the name of Osman, near the northern perimeter of the palace.

Exit the palace and meet with Osman. He tells you that Prince Ali, Al Kharid's heir to the throne, has been kidnapped by a certain Lady Keli, who plans to hold the prince for ransom. Fortunately, Osman has a plan to save the prince - tie up Lady Keli, and disguise the prince, to look like his abductor, and finally escape in plain sight.

Osman directs you to his daughter, Leela, who could be found strolling east of Draynor Village, near the field. 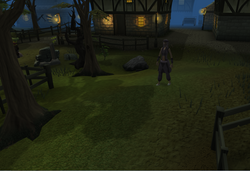 The fastest way of reaching Leela was by using the Lodestone network to Draynor Village. Talk to Leela and she tells you what you need. If you looked west from where you are standing, when talking to Leela, you would see Ned's house. Get a rope from him, using either 15 coins or 4 balls of wool. Also, ask him to make a wig for you, from the remaining balls of wool.

For members who had completed The Fremennik Isles, you could go to Ned without coins. Ask him for a rope, and say you don't enough coins and tell him that his rope smells like yak. He will confess he doesn't really make his ropes and will give you a rope for free. You can repeat this several times and get an unlimited amount of ropes.

Walk west to Aggie's house and ask her to make you a yellow dye (using two onions). Dye the wig yellow, to make it look like Keli's blonde hair.

Further, ask Aggie about a skin paste, to lighten Ali's skin tone. Aggie says that she needs a few items to make it - ashes, a pot of flour, redberries and water. Hand over the items to her, in exchange for the paste. 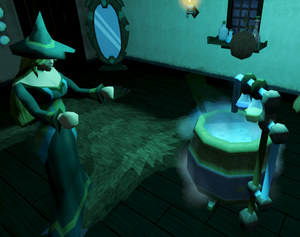 Get your soft clay, as your next stop is the jail, located immediately southeast of Draynor. The guards were level 26, though they aren't aggressive.

Go inside the jailhouse building. If Lady Keli wasn't in or around the building, wait a little, she'd respawn soon. Talk to her about anything other than Katrine. Tell her that she's famous all over RuneScape. Then ask her about her latest plan and that she must have been very skillful. Then ask her if she's sure that they won't try to break Prince Ali out. She'd tell you it's not possible because there's only one key to Prince Ali's cell and it's on the necklace around her neck.

Ask her if you can see the key for just a moment. Then ask to touch the key. You should have a soft clay with you at this time to make an imprint onto the clay. If you forgot it, you will have to retrieve it and repeat this whole dialogue all over again.

Check in with Leela, and she'll tell you to take the imprint and bronze bar to Osman in Al Kharid. After talking to Osman, he tells you to go back and collect back the key from Leela. Talk to her, get the key and ask to check if you have all the necessary items and if you're ready with the rescue.

She'll give you a plan on how she intends to do it; you now need to take to the following items to the jailhouse:

Make sure not to equip the pink skirt, or the plan won't work. 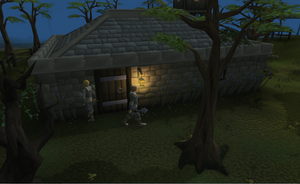 Talk to Joe, the jailguard watching Prince Ali's cell, and offer him a drink, and another, and another. Choose the option to offer Joe a beer on the first dialogue screen, and don't talk about anything else, otherwise you won't be able to offer him a beer unless you start the conversation all over again. Say "I have some beer" to start the conversation with Joe, and then offer additional drinks until he becomes drunk.

Once Joe is drunk enough that he can't even walk properly, use the rope on Lady Keli to capture her. At this point you should hurry, as Lady Keli will respawn in about a minute or so and attempt to attack you. If she does respawn before you enter the cell with Prince Ali, you need to get another rope and tie up Keli.

The entry to the Al Kharid toll gate is now free, after quest completion.

Use the key on the cell door, then talk to Prince Ali and he will use the disguise and escape. He'll say you are now a friend of Al Kharid and that he is indebted to you. Now get out, trying to avoid the remaining guards. Don't take long, as Lady Keli will quickly respawn and then the prince will respawn back in the jail and you will need to collect the items again.

Now go pass through the gate that connects Lumbridge and Al Kharid for free, and talk to Chancellor Hassan in the Al Kharid palace to claim your reward. 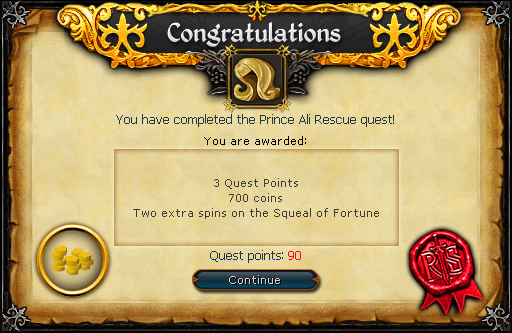 Completion of Prince Ali Rescue was required for the following:

The update history project is a work-in-progress – not all updates to this topic may be covered below. See here for how to help out!
Retrieved from ‘https://runescape.wiki/w/Prince_Ali_Rescue?oldid=34545872’
Categories:
Hidden categories: