From the RuneScape Wiki, the wiki for all things RuneScape
Jump to: navigation, search
Primal maulPrimal maul (b)? (edit)? (edit)

The primal maul is a tier 11 maul that is available while Dungeoneering. It's the strongest weapon in game, tied with Primal spear and Primal 2h sword. The primal maul can only be obtained by getting it as a drop from Rammernaut. It is the only primal weapon with a Strength level requirement, requiring a Strength level of 99 to wield, and an unofficial requirement of 35 Dungeoneering to encounter the Rammernaut. This is a frequently bound weapon due to its high damage and accuracy, the relatively low Dungeoneering requirements, and its ability to quickly kill monsters weak to crush, such as mysterious shades. It is highly useful to have someone with a maul bound on a team, because they would be able to quickly kill shades in a monolith room.

Ultimately, whether the player chooses this weapon or its stabbing or slashing cousins, the Primal spear or the Primal 2h sword, depends on which monster weakness they think they will encounter more. 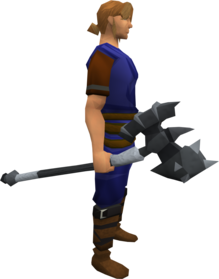