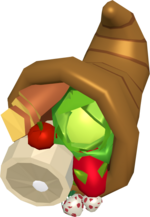 A primal feast is a container for primal portions, of which 4 are held in each primal feast. Thus the feast provides a total of 10,000 life points per inventory slot. To unpack the primal feast, only three empty inventory slots are required: the inventory slot that originally held the primal feast will act as a fourth slot and be filled with one of the portions upon unpacking. It requires level 115 Cooking to make by combining the three ingredients at a range. Cooking is capped at level 99, so a dose of extreme cooking potion must be consumed in order to reach the level required to cook a primal feast. The potion is untradable and requires level 104 Herblore to make.

It is used when large amounts of healing is needed with a tight inventory. However, there are plenty of disadvantages with the feast compared to other foods. The feast cannot be partially unpacked, so three empty spots are required in order to use it. The foods also do not heal above max health, unlike rocktail and sailfish products. It is also far more expensive than said foods - four sailfish heal just slightly less than the feast itself, while only costing 18,128 coins, while the feast costs 181,811.