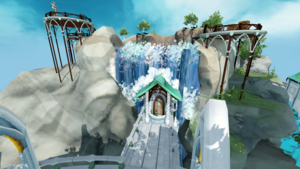 There is a bank chest on the tier 2 platform by the fisherman.

Experience that is gained from waterfall fishing is not affected by the Voice of Seren.

Using the following items and buffs will grant up to around 225,000-250,000 fishing experience per hour at level 99 Fishing:

Players must climb the handholds set into the rock face to reach the top of the waterfall. A grapple shortcut, requiring level 90 Agility, Ranged, and Strength, must be traversed in order to reach the fishing spots. Temporary boosts such as extreme strength potions, extreme ranging potions, or overloads will allow the user to access it with level 76 in the respective stats, but require Herblore levels of 89, 94, and 96 respectively. Players with a lower Herblore level can buy the tradable grand strength potion and grand ranging potion, which will suffice if the player has level 78 Strength and Ranged. For the Agility requirement, a summer pie will boost 5 levels making level 85 Agility enough; alternately, a particularly fortunate pulse core blast can raise the player's Agility by 7 levels.

Unless players have an enhanced grappling hook stored on their tool belt, they will also need to bring a mithril grapple and crossbow. Otherwise access can be gained if the player has built the nearby hidey-hole, which requires a rune crossbow, mithril grapple, and 4 mahogany planks.

Alternatively, players can teleport here by attuning a skilling portal in the Max Guild Garden to this location which will teleport them to the tier 2 platform next to the bank chest. This requires at least one skill with level 99 or the quest point cape to access the Garden and 90 Agility, Strength and Ranged to use the teleport. Boosts cannot be used to tune the portal, even if you would otherwise be able to boost your levels to access the waterfall normally.

Players can also purchase Waterfall fishing teleports from the reward shop (for 300 urchin points) which can be used to teleport to the top of the waterfall near the bank chest. Using these teleports does not require 90 Agility, Strength or Ranged.

While fishing at the waterfall players can encounter random events: big urchin, leaping urchins and geyser.

The leaping urchin event consists of leaping urchins that players can try to catch. When the urchins appear, a player has to click it in time to catch it to get a certain amount of small, medium or large urchins. This will also yield 300 experience in Agility and Fishing.

The possible rewards for catching one are:

The total being equivalent to 100 crystal urchin points.

When a geyser appears, it sprays stacks of crystal urchins around the waterfall area which can then be picked up.

Small, medium and large urchins appear in random quantities between 1 to 14. 93 Fishing is required to pick up any of these urchins, however this can be bypassed by using Area Loot[source needed].

The tree at the high level Prifddinas waterfall fishing spot has relocated to east of the fishing spot.