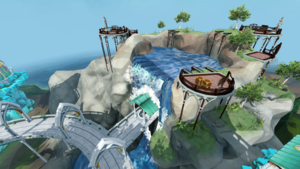 Prifddinas Waterfall is a waterfall located between the Crwys and Meilyr Clan districts in the north-east of Prifddinas. 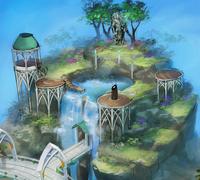 It hosts the Prifddinas Waterfall Fishing activity which requires level 90 Agility, level 90 Ranged, level 90 Strength, a mithril grapple, and a crossbow to access the top of the waterfall. However one can also build a hidey-hole for easier access, with level 75 Construction, 4 mahogany planks, a rune crossbow and a mithril grapple. Level 90 Agility (boostable) is needed to build the hidey-hole. It is also possible to get on top of the waterfall without the requirements, players can set the teleport destination to the Prifddinas Waterfall Fishing activity with a grace of the elves necklace.

There are 3 different fishing spots at the top of the waterfall, each requiring different fishing levels. The spot closest to the grappling hook location requires level 93 Fishing. Level 95 Fishing is required for the middle location, and level 97 Fishing is required for the third and farthest away location. The higher the level needed to fish, the more crystal urchin points a player can fish.

At the entrance to the waterfall area is the Prifddinas Waterfall Fishing Shop, which sells items in exchange for crystal urchin points.

At the top of the waterfall, there is a bank chest and a fisherman.

The skilling portal in the Max Guild garden can be directed to arrive next to the bank. Using the portal requires 90 Agility, 90 Strength, and 90 Ranged.