From the RuneScape Wiki, the wiki for all things RuneScape
< Prifddinas
Jump to navigation Jump to search

Prior to its release, Prifddinas was heavily speculated about due to how little was known about it, and hotly anticipated. It was initially released in 2004, but only became accessible in the latter half of 2014,[1] with half the city released on 22 September and the rest later in the year.[2] 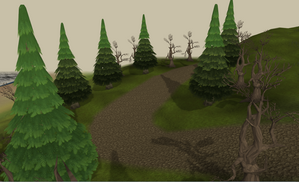 The woodland and path that can be found to the north of Prifddinas. 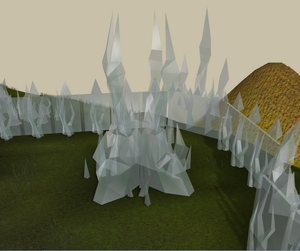 What appears to be one of the 8 crystal towers. 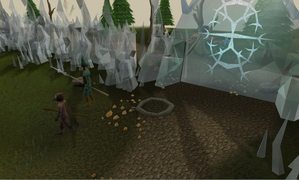 The hole mourners come out of.

There are three known entrances to the city; a large gate on the south and east sides, facing and having paths to Isafdar and Arandar respectively, and a smaller one on the north side. It is believed that there is a tunnel underneath Prifddinas, leading to the under-city, however it is extremely unstable and blocked off by rocks. A hole located by the eastern gate most likely connects to this.

Prifddinas is formed almost entirely from elven crystal, a substance that can be shaped by crystal singing, and wood. The crystal is indestructible and durable, forming the city's walls and structures. The houses vary in size, shape and exquisiteness. The city is divided into eight equally sized sections, each belonging to one of the original elven clans that built the city. Every section contains a crystal tower connecting to the centrally located Tower of Voices for communication with Seren, the elven goddess. The city also contains the Grand Library of the elves, sealed by Seren.

Apart from elves, rabbits, pawyas and grenwalls live in its vicinity; various kinds of fish, including shark, inhabit the shore to the north; finally, various kinds of butterfly make their home in and around the city. The small limestone mine at the foot of the Galarpos Mountains contains a group of dire wolves.

While the city was a seed, its crystals walls surrounded but an empty field. It only contained a few remaining pathways and elven lamps, while rabbits had their holes at its edges. 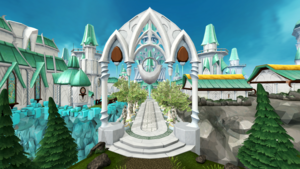 The exquisite front gate of Prifddinas.

Prifddinas was built by the elves after they were led to Gielinor through the World Gate by their crystalline goddess, Seren, and Guthix, the god of balance, in the First Age. The elves settled in Tirannwn, a large wooded area west of the Galarpos, a mountain range which isolated it from the rest of the continent. The eight Elven Clans constructed their city in a clearing north of the Isafdar forest with the crystal given to them by Seren, which could be shaped through crystal singing. Massive, incandescently glistening walls surrounded the city, which became the hub of the elves' new life on Gielinor. The World Gate remained open to allow travel to and from Tarddiad, however, and was used to bring in more crystal to Gielinor.

The elves peacefully coexisted in Prifddinas, as had been their goddess' intention. Each was given their own segment of the city, where they were given a small tower found near the city wall. In the middle Seren had already created the Tower of Voices, where the elves could communicate with the goddess herself. It would also become the site where the Elven Council of Elders convened.

During the remainder of the First, and the Second Age, Prifddinas would remain isolated from the rest of the world. Zaros did steal the World Gate from the elves and sent at least one party to the west to find out about what his divine companion Seren had been up to, but this party was ambushed by elves south of Eagles' Peak and did not succeed in reaching the city.

Likewise, the elves were able to defend their territory during the God Wars. Some would leave the safety of Tirannwn and actively fight in Seren's name, while others, most notably the militant Cadarn Clan, successfully warded off any enemies at the Underground Pass.

Following the end of the wars, Seren was forced to leave Gielinor in accordance with the Edicts of Guthix, and Guthix personally made this request, having found out that she had lied to him about leaving the world at the end of the First Age. Seren was, however, still unable to part with her followers, nor could she lie to her friend again. Therefore, she decided to explode into a shower of crystal so that she could remain with her followers. A saddened Guthix then left Tirannwn, leaving the elves without Seren's guidance for the first time in thousands of years.

When the Fourth Age commenced, the Break Out occurred amongst the elves and a pass over the Galarpos, Arandar, was built. Many travelled east, exploring the lands that are now Kandarin. Spearheaded by the Cadarn Clan, led by the legendary King Baxtorian, the expedition formed ties with the humans and gnomes in the area, although they failed to form treaties with the Bandosians due to the contemporary Feldip Hills Civil War taking place. Soon, the elves permanently settled in the newly acquired area, marking the creation of the first major elven settlement outside Prifddinas.

During the absence of the Cadarn and the other settlers, however, the Iorwerth Clan betrayed the other clans and invaded and occupied Prifddinas. They brutally slaughtered thousands of elves and took full control of the city. Until 1930, the eastern elves had no idea about this. Only the Great Divide prompted the eastern elven elders to sent a scouting party to Tirannwn, of which only one elf, Adwr, returned to report the civil war.

In an attempt to restore peace, Baxtorian launched a campaign to liberate the crystal city from Lord Iorwerth's clutches. The elves attempted to recapture the city at the Battle of Prifddinas, which ended disastrously in 1935 with many Cadarn dead. This left the few survivors stranded in Isafdar (notably Lletya, a small, hidden village the refugees erected), where they still fight today as rebels.

At some point, the Council of Elders somehow managed to completely revert the city to a crystal seed, forcing Lord Iorwerth to settle in a camp outside its walls.

Prifddinas will feature resources for sixteen skills, aimed at high level players. Each of the eight clans will have dominion over two of those skills. Details of the resources and facilities of Prifddinas were released in the downloadable Elf City design documents.

The first batch will release the Tower of Voices. The eight clans will be released as follows:

Access to Prifddinas will be by foot, through gates to the south and east, by a new lodestone in the centre of the city, a spirit tree or fairy ring to the east, a gnome glider to the north, or by crystal seeds tuneable to any of the clan segments. The city will be on platforms over a crater, with farms and buildings below them. Each clan will have its own segment of the city, with the colour and logo of the ruling clan showing which sector players are in. The centre of the city will be the Tower of Voices, from which a walkway will lead in each cardinal direction.

Amenities in Prifddinas will include a small Grand Exchange centre with two bankers and one Grand Exchange attendant, from where players will be able to teleport to the Grand Exchange in Varrock, a herblore decanter, a challenge quartermaster, a permanent fire with a chance to save logs, an NPC who will accept Divination chronicles at the same exchange rate as Guthix's Shrine, and a loyalty store.

Jagex have released five 'Design documents' which contains artwork and confirmed features of Prifddinas, each concerning one of the following topics: