From the RuneScape Wiki, the wiki for all things RuneScape
Jump to: navigation, search
The Old School RuneScape Wiki also has an article on: osrsw:Prices
"Price" redirects here. For the zygomite, see Price (Zygomite).

Prices are commonly accepted values for items which are determined by either a set number or supply and demand. RuneScape is an interesting and challenging game, due in no small part to the complexity of its economy.

For a more complete discussion about that economy, refer to the Economy Guide. This article deals with the more limited question of how to relate the various pricing levels with the player's many buying, selling and bartering opportunities.

There are several ways and places in which players can buy, sell and barter goods. Where governed by the game itself, prices will be predictable, or even fixed. At the opposite extreme, when players are directly interacting the prices will be less predictable, and sometimes even irrational.

Note that ordering prices in this way intermixes prices in which the player is buying or selling.

The store price is the selling price of an item in a store that stocks that item (i.e., the price at which a store sells the item to players). Typically that is the highest price a player sees for any item. For some items the appropriate store is the General Store, while in other cases this price is set in a specialty shop catering to that item type. General store items (for example, buckets) might occasionally show up in a specialist store, but the price and its behaviour will remain the same. Specialty shop items can be sold to a General Store as well, but it will sell for a lower price.

The next highest price will typically be the Street Price. This should vary somewhere between the store price and High Alchemy price if the trading players are acting rationally. The store price should place a ceiling on the street price because a buyer is unlikely to pay a substantially higher street price unless the item is so scarce in stores that the price is irrelevant, such as battlestaves, which have a high demand for Crafting, but Naff sells only a limited amount per day.

At the same time, a seller capable of the high alchemy spell has no reason to drop below that price when selling player-to-player — unless, of course, the value of the item is so low that the expenditure of the required runes makes the spell uneconomical. For the same reason, the alchemy prices might not even be relevant and thus provide no floor below the street price. That, in turn, means that players will seldom find the task of finding buyers worth the effort. Thus the curious problem that it is often easier to find a player selling a high value item than a lower value item. Unless you are selling something worthless (examples: Bucket, or Ashes) you are more likely to get a good price on the streets if you use forums. But it will generally take longer to sell because sometimes no one wants it. So sell on the streets if you don't care about waiting or getting a different price every time.

Street prices are only roughly known, since there is no formal exchange in which these trades could be tabulated. The least formal exchanges are those that occur in or near banks or town squares in any world; somewhat more organised are those trades taking place in specially designated worlds; and trades that originate in external forums are the easiest to examine and compare.

If you're buying an expensive item from another player, it is worth checking that the price you're being asked to pay is reasonable. This is because there are often items that have a much lower street price than their guide price on the Grand Exchange - because of this, inexperienced players are often tricked into paying a sum in-between the street price and the guide price, and end up losing money. If you're unable to get an opinion from a player you trust, you could seek advice from an external forum.

Examples of items governed largely by street price include discontinued items and other rare items such as: 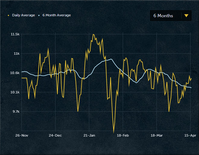 A Graph of changes in the Grand Exhange price of an item.

The next highest price is market price. This market price is adjusted according to supply and demand (based on player offers in the Grand Exchange). (Before free trade was reintroduced, offers were limited to 5% above or below this price. The buttons which were used to select these extremes now increase and decrease the offered price by 5% an unlimited number of times.)

Information about prices can be found on the Grand Exchange Market Watch.

Current prices are available from the Grand Exchange Database at http://itemdb-rs.runescape.com/frontpage.ws

If your selling price is less than 50% of the guide price, a message will pop up before your sell order goes through saying "Warning: You're trying to sell an item for far less than its guide price!". This was discovered on 22 December, 2012, with an item worth 600,000.

The "high alch" price is that of which the appropriate store would purchase the item from the player if the store had none of that item in stock. In other words, the highest price at which the game itself would buy an item from a player. There are, however, exceptions: the specialist shop Grum's Gold Exchange in Port Sarim used to buy gold jewellery at prices higher than high alchemy if none are in stock. The existence of the high alchemy spell also explains why many mid-range items are seldom traded player-to-player: they are often created in such numbers that searching for buyers would be futile, while the item is valuable enough to make the spell a worthwhile expense.

The associated "low alch" spell exchanges the item for the price that would be paid by a General Store, 2/3 of the price that High Alchemy would provide, but this can change depending on the initial value of the item.

In the worst type of scenario — and the only one available to new players — is selling items directly to stores. Typically, stores will buy items at half the high alchemy price. It is also commonly used to dispose of bulk items which are too cheap to cover the expense of the runes required for High Alchemy, and that do not sell well in the Grand Exchange.