From the RuneScape Wiki, the wiki for all things RuneScape
(Redirected from Preset)
Jump to: navigation, search

Bank presets are a feature of the bank of RuneScape that allow saving and loading an inventory, equipment, and/or beast of burden layout quickly. Bank presets were added with the update on 7 April 2014.

Players have access to 10 presets and one Beast of Burden preset.

The preset buttons in the bank.

The Preset interface is part of the Hero top-level interface. It can also be accessed from the bottom of the bank interface in the Presets tab by clicking on the cog icon. 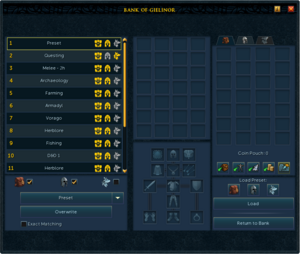 Presets can be set to load any combination of inventory, equipment, and/or beast of burden.

Presets are loaded by depositing everything from the location to be loaded into the bank and then withdrawing the requested items to the specified places. If an aura is active, it is excluded. If a stackable item is in the preset but not enough of that item is available, all the items are withdrawn and a placeholder is left behind. If an item could not be found (or not enough for stackable items), a chatbox message is displayed stating there was an issue with a list of all items that could not be found as additional, filtered messages.

The preset is now saved and ready to load.

Alternatively, to quick-save a preset:

Presets can only be loaded at a bank.

Preset 5 can also be dragged onto preset 1 using the presets configuration interface, and then 1 could be used instead of ctrl-5.

Initially, players had access to 5 presets, plus one beast of burden preset. Additional presets could be temporarily rented using loyalty points, or permanently bought using bonds or RuneCoins.

An update on 25 January 2021 gave every player access to all 10 bank presets for free.

Prior to this update, the additional preset costs were as follows;

Regardless of the package purchased, the cost for a preset slot is 571.43 loyalty points per day.

The update history project is a work-in-progress – not all updates to this topic may be covered below. See here for how to help out!
Retrieved from ‘https://runescape.wiki/w/Bank_preset?oldid=35331772’
Categories:
Hidden categories: