From the RuneScape Wiki, the wiki for all things RuneScape
(Redirected from Premier Club Vault)
Jump to navigation Jump to search

The Premier Vault (previously known as the Premier Club Vault) is a monthly Distraction and Diversion that can be accessed through a portal in Varrock's Grand Exchange. It is exclusive for members that have a Premier Membership subscription. Ironmen can access the vault with a different drop table.[1]

The activity provides players with the opportunity to win rewards by opening as many chests as they can within one minute. The larger the size of the chest, the bigger the prize that will be within it. However, opening larger chests takes more time, but players get 2x the reward for medium, 3x for large, 4x for huge chests, and 5x for the colossal chest.

If the players have not accessed the vault near the end of current month, and have Runescape Mobile installed in the phone, they will receive a push notification titled "Premier Vault Reminder", saying "Don't miss out on your monthly rewards!"

You only need to click the chest once and allow the time for it to open, or run out so you receive that chest reward. Re-clicking it will re-start the attempt to pick whatever chest you are at.

Players should open the colossal chest in the last 6 seconds, since the last clicked chest is guaranteed to be opened even if time runs out. If there is a Prismania or similar promotion granting extra bonus experience for fallen stars won off Treasure Hunter, it is recommended to do this activity during that promotion as the stars obtained from the Vault will grant more experience as well.

Time to open chests, not including the time to walk/run to chest: 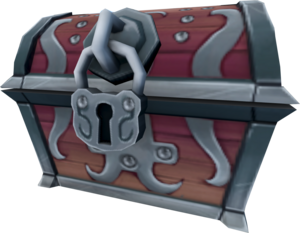 A chest in the Premier Vault

For each chest opened, players will receive an item from the table below. The quantity received is multiplied depending on what type of chest was opened.

This loot table is much different compared to the regular table, and is very similar to the Dwarven instinct aura's table. The loot is based around total level.