From the RuneScape Wiki, the wiki for all things RuneScape
(Redirected from Pre-pay card)
Jump to: navigation, search 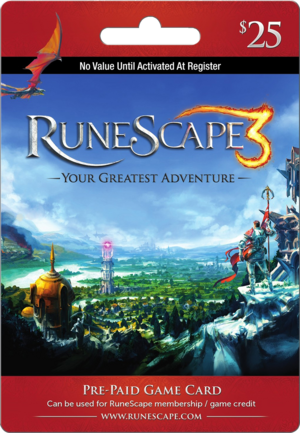 A RuneScape game card with the redemption value of twenty-five United States Dollars.

RuneScape Prepaid Cards are game cards supplied at over thirty different retailers that can be redeemed for RuneScape membership, Bonds, Keys, or RuneCoins. They can be bought in the $10 USD and $25 USD denominations.

A Personal Identification Number (PIN) is located on the back of the card, usually under a layer of UV Ink that must be gently scratched off in order to reveal the code. The code is then entered into the RuneScape website after selecting the "Prepaid Cards" section of the "Shop" drop-down menu.

Where to buy[edit | edit source] 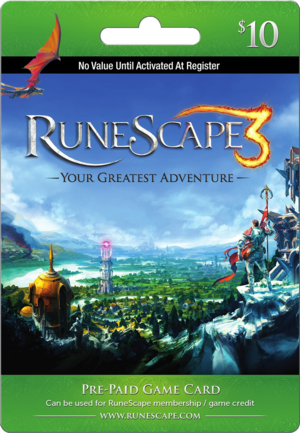 A card with a ten USD redemption value