From the RuneScape Wiki, the wiki for all things RuneScape
Jump to navigation Jump to search
For the interactive scenery for special research, see War table.
Praetorium war table? (edit)? (edit) 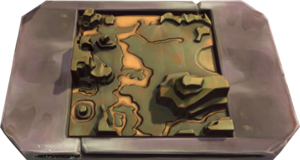 The praetorium war table is found in the Kharid-et Dig Site, at the centre of the main fortress level. It can be used to enter the praetorium of the fortress, where ancient magick munitions, praetorian remains and war table debris can be found.

At the time of release, the praetorium was only accessible while a ring of visibility was worn (unnecessary if the player has claimed the ability from Sliske after Sliske's Endgame). This requirement was removed in an update on 20 April 2020, but the pylon or shadow anchors are still required.

This information has been compiled as part of the update history project. Some updates may not be included - see here for how to help out!
Retrieved from ‘https://runescape.wiki/w/Praetorium_war_table?oldid=35770020’
Categories:
Hidden categories: