From the RuneScape Wiki, the wiki for all things RuneScape
(Redirected from Power to the Players)
Jump to navigation Jump to search
The Old School RuneScape Wiki also has an article on: osrsw:Polls

The poll logo on RuneScape

Polls are a feature released by Jagex on the RuneScape website or in-game about topics on RuneScape. These polls are conducted by Poll Orks, and the results are announced a week or two after their release. In the past, polls were generally for members only, aside from one non-members poll. Jagex was pretty excited, but many members complained about it. However, upon Mark Gerhard's promotion to CEO of Jagex, most polls have instead been open to everybody. On 22 April 2010, Jagex announced that from then on, all polls will be open to both members and non-members, with a weekly prize draw for one month of RuneScape membership to a lucky participant.

In-game polls (formerly Power to the Players and Player Power) are an in-game polling system introduced to RuneScape in mid-January 2014 to give players the ability to choose the content and updates being added into the RuneScape game. All polls are open to members, and certain polls are available to free players. Seven polls are run every month, with the exception of January 2014 with six polls.[1] Each player only has one vote per poll, but they are allowed to change their mind as many times as they wish while the poll is open. The vote they have chosen at the close of the poll is the one that will be logged for that player.

Voting happens in the Vote Now! tab of the Community interface. The interface can also be accessed by using one of the poll booths, provided that there are active polls that the player hasn't voted on.

With every poll, the winning option is guaranteed to enter the game. This does not, however, mean that the losing option will never be added as well, just that it will not be given priority at that time. An exception to this will be "yes/no" polls; a plurality "no" vote will mean that update will be scrapped. Jagex had announced that some unpopular aspects of the game such as the Evolution of Combat, the Treasure Hunter, and the Solomon's General Store will not be polled as Jagex consider them to be necessities.

There is a specific section of the forums for the discussion of Player Power polls and another.

Player-submitted polls are based on questions submitted to Jagex through an email address set up for polls in specific: [email protected].[2] Usually, the question is accompanied by the name of player who submitted it.

Player-submitted polls starting appearing circa 2007 and are conducted once every month.

Guaranteed Content polls were introduced on 31 May 2007. These polls are conducted to obtain feedback on improvements within the RuneScape game. As the name suggests, the winning answers from the polls are guaranteed to be included into the game. 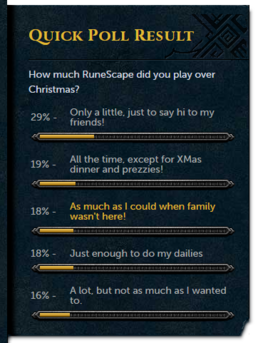 In addition to the two polls mentioned above, there are other polls which do not fall into any category. These polls do not have any impact on the game and are conducted by Jagex for research purposes.

With the recent update to the website, the listing of polls and the polls archive have been removed. The only poll that remains is feature poll on the main page. All poll links in past news articles with links to previous polls are now broken. Jagex has yet to comment on whether polls and past results to polls will return.

RuneLabs was a suggestion system where players submitted ideas to be added to the game, to be voted up by other players. Jagex would give an idea of the sort of content they are looking for every month, and then they reviewed the ideas that were relevant. Due to lack of participation, this service was shut down on 28 May 2016.

Occasionally, during livestreamed events such as Developer Q&A's, JMods will use the free quick poll website, Strawpoll, in order to gauge interest in a thought or idea.