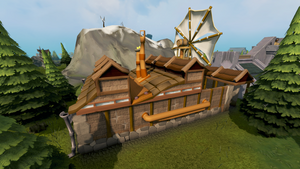 The Power Station is a dwarf-run building located just west of the entrance to the Dwarven Mine. It appeared on the 7 May 2008 as the central plot device of the Perils of Ice Mountain quest.

During the Perils of Ice Mountain quest, the power station is renovated and replaced with a more environmentally-friendly power system. 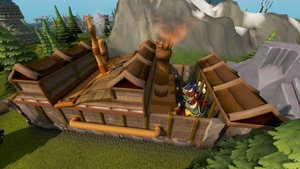 The Power Station before it's made more economical.

The original power station was commissioned by Drorkar, an industrious dwarf in the service of the Consortium, a collection of eight powerful mining companies that govern the dwarven capital city of Keldagrim. The station was the first of its kind, designed to produce power to fuel Nurmof's automated pickaxe machine.

The station was one of two ideas proposed, one by Drorkar and another by a dwarf named Bordiss. The night before the ideas were brought to Nurmof, however, Bordiss got drunk while discussing the matter with Drorkar. When Bordiss awoke, the key to the chest containing his plans was missing. Believing he had lost it in his drunken state, he swore a vow of silence and joined the monks in the nearby monastery. Meanwhile, the power station's success had nearly convinced the Consortium to commission the construction of many more stations of the same kind.

During Perils of Ice Mountain, players discover that it was Drorkar that stole the key in order to make sure that his plan would be put into action. When this is revealed, Bordiss breaks his vow of silence to recover his key and commissions the construction of a cleaner power station.

The dragon hatchlings powering the machine.

The original station obtains power by using a collection of small furnaces. These furnaces are powered by baby dragons, who are force-fed coal and then made to breath fire into the furnace. The furnaces produce energy from the burnt coal, which allows for the powering of large machinery.

Over the course of the quest, however, the issues that surround the station become apparent. Due to global warming in Gielinor, a number of side effects occur, which ultimately threaten to destroy RuneScape's environment. As the player stops the machine during the quest, many of the eventual effects never happen. The known effects and controversies, in order, include:

Upon completion of Perils of Ice Mountain, Drorkar's station is replaced with a clean, wind-powered station designed by the dwarf Bordiss. This station uses wind blown from Ice Mountain to obtain power. In the event that winds are down, power is reserved within the station.