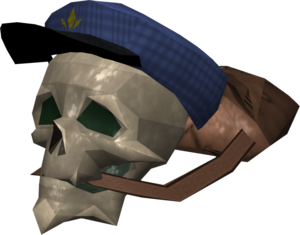 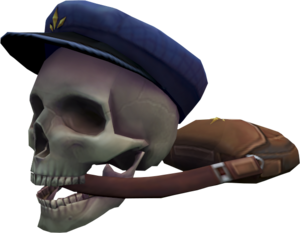 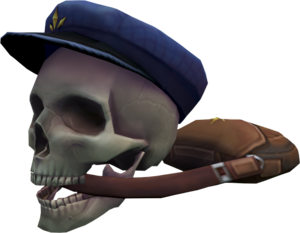 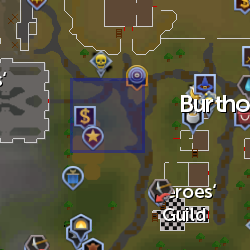 Postie Pete is a skull serving as a postman for RuneScape Parcel Delivery Team, carrying a satchel around in his mouth. He is one of Gielinor's only two known postmen, not counting The Postcat. He delivers all of the Postbag from the Hedge letters to their destinations, and ventures into whatever dangerous places he must to get there - although he can never be seen to do this in-game, preferring instead to pop up around locations within RuneScape.

He makes a short appearance in A Clockwork Syringe, when players try to enter their player-owned house he leaves a note, which can be used to start the quest. He also plays a small role in Pieces of Hate and Violet is Blue Too.

In 2018 he acted as the host for the Parcels from the Hedge event in Burthorpe, giving information about the different rewards and keeping Postie Pete's Post Office.

He also appears in Tortle Combat as Postie Pete-za, which is the alias that he uses to deliver pizza so no one bothers him. Players can speak with him to start the miniquest.

In Postbag from the Hedge 19 it is implied that Postie Pete became a skull after being attacked by a dragon.

During a conversation with Lanthus at Castle Wars, Postie Pete mentions that he was cursed by a witch.

In Postbag from the Hedge 40 it is implied by Mother Mallum that she had momentarily took control of Postie Pete's mind, suggesting that he is in some way alive, in order to write a reply to a postcard.

He replaced the internal messaging delivery system of Daemonheim by jamming a spanner into the machine that ran it.

He can speak over 1,000 languages including Wyvern, and usually tells a rather weak joke. According to Baba Yaga, Postie Pete's Crafting level is 1. However, this is debatable as in a letter's response, he completed the Lost City quest, which requires level 31 Crafting. Lanthus also says to Postie Pete that he should say hi to the kids for him, this showing that he must have children.

It is possible that he is a spy or a scout for the Imperial Guard of Asgarnia because of the conversation players can have with him while at the Bandit Camp, and the conversation he has with Party Pete: "I'm here to see some white knights." He also mentions a "plan" that is very secretive with Noterazzo in his general store.

Postie Pete as he appears on his own postage stamp.

Postie Pete can appear at the following locations:

It's Pete!
The jingle that plays when Pete appears.