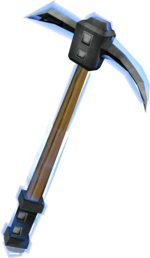 The Possessed pickaxe is a monster that features in the Lava Flow Mine, where it is a distraction from regular training in the mine, along with boiler breakdowns, TzHaar heroes, and the Liquid gold nymph. After the pickaxe is defeated, a Dwarven ancestor spirit appears; the player who killed the pickaxe will get at 10% boost of mining experience in the mine for 10 minutes if they speak to him. Other players may also talk to the spirit, but they will not receive the boost. If a player kills another pickaxe before the timer from their 1st one has ended, the previous timer will cancel and a new ten minute timer will start. If a player changes worlds while the ten minute timer is still active, they will still receive the bonus for the remainder of their time. The bonus does not apply to lava geysers.