From the RuneScape Wiki, the wiki for all things RuneScape
Jump to navigation Jump to search
Portal (Lumbridge)? (edit)? (edit) 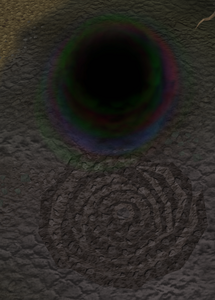 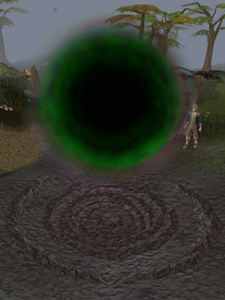 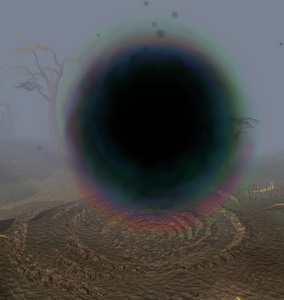 On 3 July 2013, a portal similar to a black hole appeared behind the Lumbridge Castle. With it, a portal expert is studying it. According to her, it may be a portal that is created by gods to travel, or alternatively a by product of Guthix's death - both of which to some extent is true, Zamorak arrived through the portal searching for Divine Tears - the by product of Guthix's death. There are also other characters, observing the portal and giving their thoughts on it. It was a teaser for the Battle of Lumbridge World Event.

On 11 July 2013, the portal increased in size. Additional NPCs were added to the area and some of the original NPC's dialogue altered to reflect the portal's size change.

On 17 July 2013 the portal increased in size once again, with cracks appearing in the ground around it. Five new NPCs arrived; a second H.A.M. Member, an Elf, two village children, and a Gnome. Dialogue was also added to existing NPCs. Also, the Portal Expert tells you that the portal is similar to the portals the Gods used to make to go to different dimensions. The ground below the portal appears to be covered in fissures filled with a green liquid which is believed to be the Divine tears.