The exterior of the prison.

The Port Sarim jail is a top security prison located in Port Sarim, commonly referred to as the worst jail in Gielinor. Players are sent to the jail by Shantay if they twice refuse to pay his fine of five coins after declaring to be an outlaw, though are able to escape quite easily by picking the lock or teleporting out. The Port Sarim lodestone in particular is only a few steps away from the exit.

Location of the Port Sarim jail in relation to Port Sarim

The Port Sarim jail is home to many criminals and outlaws, all standing in their cells on ground floor[UK]1st floor[US] looking bored, or hopefully rethinking their lives. 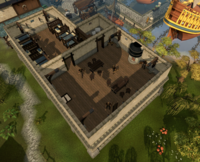 In July 2016, Port Sarim was invaded by Jed and the Skulls. They managed to seize many of the prisoners, leaving Prison Pete and Wormbrain. In response, the prison guards, led by Bennet, fought back and recruited adventurers to help man the cannon on the roof and make repairs.

Sleeping on the job.
Retrieved from ‘https://runescape.wiki/w/Port_Sarim_jail?oldid=35731065’
Categories:
Hidden category: