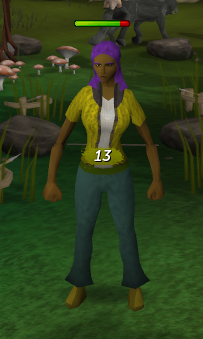 A player taking damage from poison.

Poison is a detriment that players and monsters may suffer when they are attacked by a poisoned weapon or poisonous non-player characters. The damage can range from 1 to theoretically over 10,000 (Har'Lakk the Riftsplitter's accumulating poison), and it strikes every 10 seconds or whenever an attack re-applies it. Poison can be cured by an antipoison, which is handy to have when fighting poisonous monsters.

When a player or monster is poisoned, a number appears with a green hitsplat (

), indicating the amount of damage the poison has dealt to their life points.

Being afflicted by poison does not disrupt skilling, Home Teleport, or put the player into combat stance, but players cannot rest if they are poisoned. Players will not take damage from poison during cutscenes, but their health still regenerates normally.

A player applying weapon poison to their attacks.

Weapon poison is made through the Herblore skill. When the poison is used, the player's attacks will become poisonous for a limited time. Any attack style can benefit from weapon poison, including magic spells. Multi-target abilities like Ricochet will have a chance to apply poison to secondary targets.

There is a 12.5% chance per hit to poison your opponent(s) in combat. Poison damage is dealt on the first application and renews the poison duration. Poison will hit every 10 seconds and wear off after 3 minutes. Weapon poison applied appears as a buff, and the duration for which weapons will be poisonous depends on the strength of poison used.

Several of Gielinor's monsters are naturally venomous, inflicting the poison effect on players periodically during combat, while others have special attacks that inflict poison.

Additionally, there are other sources of poison, especially from triggering traps, that are commonly associated with the Agility and Thieving skills.

Certain monsters in the game can inflict poisonous damage that is different from conventional poison, usually as a result of being a special attack or an environmental mechanic. Unlike conventional poison, special poison does not turn a player's health bar green, and cannot be negated by regular cures and prevention means. The following monsters are able to inflict special poison damage:

Poison can be cured using various types of remedies, some of which provide an immunity. Antipoison potions are the most popular antidote and they come in various levels which provide progressively longer immunity to poisoning. All regular poisons can be cured by regular antipoison, but each poison hit that would have been received will lower the effectiveness of the antipoison used.

Poison can be cured by left-clicking on the heart icon next to the health bar when it is green with poison. This requires the player to have an antipoison in their inventory.

A safe alternative for players is to teleport to their Player-owned house; dying there will result in no items being lost. Additionally, leaving the house by using the teleportation methods available (e.g. mounted amulet of glory, the portal chamber, Exit Portal) will also cure poison completely.