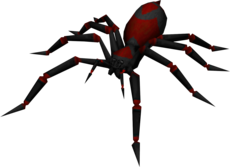 Poison spiders are monsters which can be found in many locations, including the Wilderness. There is a chance to find one when opening a chest in the Observatory Dungeon. They are aggressive, and attack with both melee and ranged, though they only use the latter if the player retaliates. These creatures have very few benefits to players wherever they are present, as they have little to no drops, are fairly accurately able to poison, and can accurately hit over 180 with their attacks. The poison of these spiders can do 30 - 70 damage per hit. Contrary to popular belief, Protect from Melee does not prevent them from causing poison. As with all spiders they will very rarely drop charms.

They are generally hated by most players, as they make any location much more difficult to survive in. They are especially irritating to players training on black demons in the Edgeville Dungeon. These creatures pose a threat to players during the Family Crest quest during the battle with Chronozon. However, with the release of the member's loyalty program, the poison purge aura, which causes poison damage to heal you, could make these monsters beneficial.

Their attacks cause poison only if they inflict damage or, for players using Protect from Melee or Deflect Melee, if the spiders would have hit for damage. They usually land a successful hit in the first 2 attacks if the player is not wearing good armour or has a low Defence level. The presence of these creatures generally forces players to bring anti-poison methods, wasting an inventory slot which could have been used for other useful supplies. These monsters are not aggressive to players with a combat level of 127 or greater, except in the Wilderness and the area where Chronozon is found.

This information has been compiled as part of the update history project. Some updates may not be included - see here for how to help out!
Retrieved from ‘https://runescape.wiki/w/Poison_spider?oldid=35826499’
Categories:
Hidden categories: