From the RuneScape Wiki, the wiki for all things RuneScape
< Player killing
Jump to: navigation, search

In PvP or Player-versus-Player, equipment and the strategic use of abilities will determine a win or a loss. With practice, impromptu reaction speed will increase and cognitive ability will improve. PvP combat may appeal to people for various reasons, whether to hunt down other players for loot, to attend a (rated) Clan War or simply for fun. With luck, player killing can be extremely profitable. However, there is also the risk of losing money, especially for beginners.

Knowledge of PvP combat can also prove useful in Player-versus-Monster encounters, such as when countering stun mechanics or bleeds.

Each combat style has its own set of certain advantages and drawbacks. A player should pick their style based on your highest stats and the style that the opponent you'll be fighting is using. The Combat triangle assures that each class has an advantage and disadvantage when matched-up. Each class has unique abilities and gear that distinguish them from each other.

Having the appropriate abilities on your action bars is critical in PvP. Not having the needed ability ready to use can result in death.

More than one action bar will need to be used for PvP efficiency. To enable secondary and tertiary action bars, open Game Settings and scroll down the side menu to Action Bar Settings. 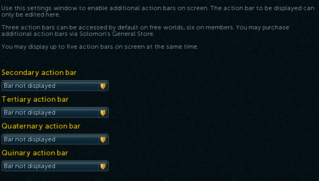 The action bar mode should typically be set to Full Manual to allow full control of abilities. However, for those who are still learning to use Full Manual, Revolution mode can remain active provided you make an attempt to learn the manual keybinds. You must also ensure that Revolution does not trigger your threshold or ultimate abilities as these should be used manually and with careful timing.

Ideally, the following action bar keys should all be assigned keybinds. This allows you to respond faster and learn via muscle memory.

Tuska's Wrath may be switched out if you are comfortable using Berserk.

Some space on this bar can be saved by moving style-specific prayers onto their respective primary bars. For example, Turmoil would replace Tuska's Wrath on the Melee bars, Anguish would do the same on the Ranged bars, and so forth. Tuska's Wrath can then be added to the secondary bar, effectively freeing up two spaces.

The last two spaces can be filled with a shield and weapon switch, Overloads/potions or any other optional item.

Unlike PvM, eating food does not reduce adrenaline in PvP. This makes food (such as rocktail) the primary method of healing. To complement this basic food, potions such as the Saradomin brew and Super Guthix brew can be sipped in the same game tick to allow for an increased healing speed. These potions are able to be sipped twice as often as food can be consumed.

To effectively heal using this method, the rocktail and Saradomin brew must be given comfortable keybinds that allow you to press the rocktail keybind then the brew keybind in quick succession (or simultaneously). This produces a heal of 3300 per bite.

Other methods of healing in PvP include:

In the middle of a fight, always remain calm and maintain a good defensive rotation. The ideal order is:

This rotation should typically be started when your opponent is about to reach 40% adrenaline. You must also strictly maintain this rotation throughout the fight, whilst keeping your health up and trying to defeat your opponent simultaneously.

Although Debilitate does not break free nor prevent a stun, it reduces incoming damage by 50%, mitigating the effect of a high damage combo such as Wild Magic → Asphyxiate.

Freedom should only be used when it is really needed. If your opponent does not stun you (nor apply a tripled Slaughter, etc.), you should simply Anticipate again and start this rotation over. Take care not to waste Freedom while your Debilitate is active.

In the event of an emergency, such as when your Debilitate misses and your Freedom is still on cooldown, equipping a shield to use Reflect can be the difference between life and death.

While shield abilities are crucial to tanking in multi-way combat zones, using them continuously is regarded as taboo in single-way combat. The reason for this is that a very experienced player with good armour and a shield can negate almost all damage that an opponent can inflict on them, dragging the fight out and expending time and resources. This is called 'shield-camping' and should be avoided in PvP.

Because of the technicality of these numbers, there are certain adrenaline thresholds that must be noted. For example, when your opponent reaches 40% adrenaline, they are able to sip an Adrenaline potion which brings it to 65%. From 65%, they are then able to use two threshold abilities in quick succession. This could catch you off guard and potentially end the fight fast.

These are the main adrenaline thresholds:

Movement is fundamental in PvP, whether for defensive or offensive purposes. It can give you a huge advantage against a non-moving opponent.

Reasons to move include:

To counter any of these abilities, you simply need to move out of range or behind an obstacle. You can also choose to simply stun them to interrupt the channelling, thus mitigating damage taken.

(Bold text denotes the abilities that you are strongly recommended to cancel via movement.)

Bleeds often seem like insignificant abilities in PvP but many players overlook the effect of movement on bleed damage. Combust, Fragmentation shot and Slaughter all increase in damage significantly if the target moves.

To move your target and increase bleed damage, you can do any of the following:

Stalling is the act of delaying an ability so that it is triggered at the same time as the following ability. This creates a burst of damage that increases the likelihood of defeating your opponent, as compared to two separate hits.

Stalling is performed by activating the first ability while out of range, causing the ability to go on cooldown without having hit the target yet. At this point, the ability can be triggered at any time simply by left-click attacking your opponent. If the ability is stalled sufficiently, the global cooldown timer will have elapsed, allowing you to use another ability in the same instant as the stalled one.

Not all abilities can be stalled, however. Channelled abilities will not activate nor go on cooldown if you attempt to use one while out of range of your target.

PvP is the only combat encounter in Runescape where your opponent has access to unlimited healing. This calls for a different way of dealing damage. Rather than a slow and steady damage output, you want to generate an explosive burst of damage to defeat your opponent fast, without waiting for them to run out of food first.

These bursts can be achieved by using certain combinations of abilities in sequence. Each combat class has a few possible combo attacks:

These are not the only combination abilities that exist. More complex ones exist, such as the inclusion of the Reprisal ability.

These items and abilities can be used to give you an advantage in PvP combat:

This gear is costly and should only be used when:

These setups are very effective per cost and can generally be used for:

While within the Wilderness, you should always have an escape plan that you can carry out in the event of an emergency. Certain teleport restrictions and the Teleport Block spell can make escaping nearly impossible sometimes.

If venturing up to level 30 Wilderness, the following teleports will allow for teleportation:

If only venturing up to level 20 Wilderness, the ideal method of emergency teleportation is a Teleport to house tablet. By going into Game Settings → Player Owned House Settings, the teleport arrival location can be set to "House". This means that you will teleport directly into your player-owned house upon breaking the tele-tab. This ensures that if you happen to die after teleporting (such as to a delayed hitsplat or weapon poison), you will simply respawn outside your POH with all items intact.

When escaping on foot, it is important to know the difference between a stun and a bind. Binds prevent movement but do not prevent abilities. This means that while bound, you are still able to use abilities like Surge/Escape, Barge and Bladed Dive.

A stun, however, does not allow you to use any abilities (with the exception of Freedom, which clears the stun).

Although most of the high level PvM perks work just fine, certain other perks can be extremely useful in a player vs player situation. A few of the most notable are:

These perks can be added to either armour or weapon gizmos, making them quite versatile.