From the RuneScape Wiki, the wiki for all things RuneScape
< Player-owned port
Jump to navigation Jump to search 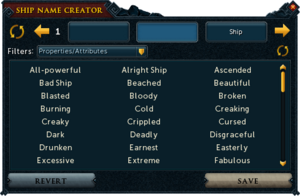 In the player-owned port, the name of each unlocked ship be may customised with the Ship Name Creator. The interface is brought up by clicking on the pencil icon in the ships interface (on the Minigame tab), next to the ship you wish you name. This can be done regardless of whether the ship is in port or at sea.

The interface's top toolbar shows the ship number and current name, part by part, along with three buttons. The ship being renamed can be selected by the blue-and-gold arrow buttons, which will cycle forwards or backwards through all the player's available ships. The green-and-gold "Randomise" button to the right side of this toolbar will randomise all three parts of the name simultaneously.

Each name has three parts, the prefix, the first main part, and the second main part. Each part can be chosen individually from lists of predefined words and phrases. The currently chosen part may also be randomised by clicking the lower "Randomise" button to the right of the interface. As soon as a change is made, the green "Save" and red "Revert" buttons light up and become available. Once the player is satisfied with the changes, clicking the Save button at the bottom right will save the changes, while the Revert button will erase all changes and the ship will keep its current name.

The list of available names is below, separated by part and by filter. Note that, unlike these, the in-game lists are not alphabetised.

The ship prefixes allude to the names used by military and exploration groups of various organizations: