Plague City is the first quest in the Elf (Prifddinas) quest series. In it, the player investigates a plague that has affected West Ardougne.

Travel to the north-western part of East Ardougne and talk to Edmond. He can be found in his garden, just north of the Flying Horse Inn. Edmond tells you that his daughter, Elena, has gone to West Ardougne to investigate a plague and he is very worried about her. Offer to help and he'll tell you to talk to his wife, Alrena, about obtaining gear to shield against the plague.

Alrena, who is inside the house, says that she can make a gas mask if you can get her some dwellberries. You can pick up some dwellberries inside the McGrubor's Wood enclave, by entering through the railings on the northern boundary, but beware of the level 33 guard dogs within. Give her the berries, and she'll make you a mask. If you lose the mask, there will be one in the wardrobe.

Make sure you get a picture of Elena while you're inside the house.

Talk to Edmond again, and he'll tell you that direct access into West Ardougne is not possible, for obvious reasons. He, instead, has a plan to dig under the wall all the way through to the Ardougne sewers, and then proceed into the city. 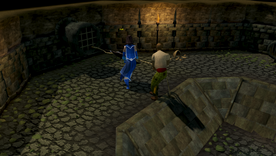 First, you'll need to soften the ground. One by one, use your buckets of water on the mud patch in his garden to make the soil soft enough to dig into, then pick up the spade in the garden and dig through the soil into the sewers. If you didn't bring water, there is a bucket spawn in the garden, along with a water source inside the house. Edmond will follow you inside.

Walk to the south, and you'll find a pipe blocked by a grill. Try to pull off the grill, but you find that you're not strong enough to do it alone. Just use a rope on the pipe and talk to Edmond to get him to help pull off the grill. Edmond tells you to meet up with his friend, Jethick, who can help you in finding Elena. Now that the way has been unblocked, put on your gas mask and climb inside to enter the plague city.

Once inside West Ardougne, talk to Jethick, who can be found in the town square. Ask him about a girl named Elena, showing him her picture. He'll tell you that Elena indeed is in the city, helping people, and is currently at the Rehnisons' house. Jethick also requests you to give back a book that he borrowed from the family.

The house is located north of the town square. Try to enter the house and you'll find that it is locked. Knock on the door, and mention that you are Jethick's friend and are returning a book, and they'll let you in. Once inside, talk to Martha or Ted Rehnison, who tell you that Elena used to stay at their house and was planning to leave, but something terrible happened. They tell you to talk to Milli, their daughter, who can be found upstairs in her room. When you talk to Milli, she says that she saw Elena being kidnapped by some shadowy figures, when she was playing in the south-east corner of the city. Elena was shoved in a sack and taken to a boarded up building, marked with a big cross, which had no windows.

Head back out of the house and south of the town square to find the house that Milli told you about. It is behind (south of) a row of crumbling houses, south of the broken-down chapel. Try to open the door, but the mourners won't let you in because it's been hit hard by the plague. Tell them that you're looking for a kidnapped girl and that you want to check regardless. They'll tell you that you need to apply for clearance from either the head mourner or Bravek, the city warder.

Go back to the town square and go into the large building just north of the manhole. Tell the clerk that you need permission to enter a plague house, and that it's very urgent, and he'll let you inside to see Bravek. He is located upstairs, in the eastern room. He can hardly talk to you, though, as he's badly hung over. He'll give you a scruffy note with a recipe for a hangover cure that his herbalist, Trudi made for him.

To make the cure: 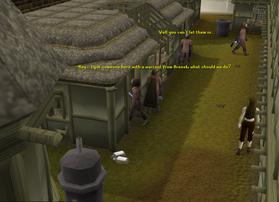 Sneaking into the plague house.

Give the concoction to him. He drinks it, and says that he feels much better now. When you talk to him about the plagued house, he says that mourners usually deal with these issues, but if you say that the mourners won't listen to you, he writes you a warrant that grants the permission you need to go search for Elena.

Head back to the house and try to enter again. Use the warrant on the mourner guarding the east door to show it to him. They will talk amongst each other about the authenticity of the warrant, giving you a chance to sneak inside. Search the barrel on the west side of the staircase to find a small key. Then go downstairs to the basement and unlock the cell door to release Elena. She tells you that she was about to return to East Ardougne with some samples to analyse and find a cure for the plague, when she was kidnapped and kept captive. She thanks you and tells you to talk to her father, who will reward you.

You can return to Edmond in the sewers using the manhole and talk to him to end the quest. 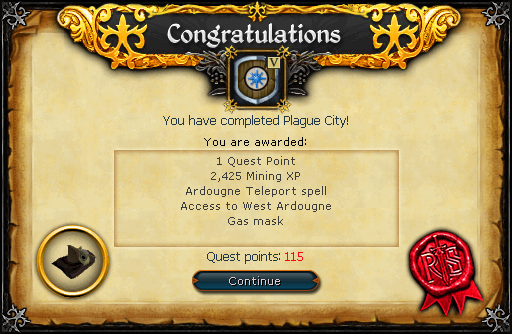 Plague City is directly required for the following quests/miniquests:

This information has been compiled as part of the update history project. Some updates may not be included - see here for how to help out!
Retrieved from ‘https://runescape.wiki/w/Plague_City?oldid=35954966’
Categories:
Hidden categories: