From the RuneScape Wiki, the wiki for all things RuneScape
Jump to navigation Jump to search
The Old School RuneScape Wiki also has an article on: osrsw:Pitfall trapping 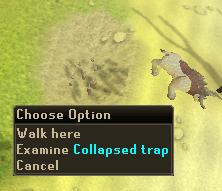 Pitfall trapping is a Hunter technique requiring 31 Hunter. It involves building a pit, using logs and a knife (toolbelt will work) in special spots in the jungle, near Cairn Isle and Rellekka Hunter area. Build the pitfall trap, then tease the relevant monster with a teasing stick. Now run back to the pit and jump over it. The creature will often jump over the pit and attack you.

Unlike most other hunted creatures, pitfall trapping creatures will do damage, so food may be a good idea. If hunting Spined larupia for experience, it is more convenient and faster to catch Green salamanders via net trapping. Some may prefer to bring a bird snare and iron spit as well as the pitfall trapping items to catch birds, and cook the bird meat for food instead of bringing food of their own.

Since creatures will not jump the same pit twice in a row, you must move to another nearby hotspot to build another pitfall and try again. The pitfall trap will collapse after a certain amount of time. You collect furs when emptying the trap, which can be made into hunter gear in the Varrock fancy-dress shop. You can buy them from the Grand Exchange for a fine price, too. The furs may be tattered or "perfect"; tattered furs are only suitable for bodies or legs, but perfect furs are suitable for headpieces, bodies and legs. One receives perfect fur approximately one-fourth of the time. It takes 3 furs plus coins to make a set. Alternatively, you may sell the furs in Ardougne or on the Grand Exchange to other players who wish to use them to train Summoning.

This information has been compiled as part of the update history project. Some updates may not be included—see here for how to help out!
Retrieved from ‘https://runescape.wiki/w/Pitfall_trapping?oldid=35686519’
Category:
Hidden category: