From the RuneScape Wiki, the wiki for all things RuneScape
Jump to: navigation, search
Loading...
POHLove Story 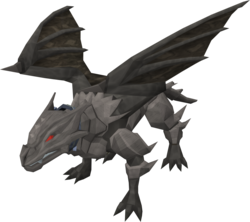 Pit iron dragons are monsters that may be placed in a player-owned house Dungeon pit at a cost of 7,500,000 coins after completion of Love Story with 97 construction. Even though they drop bones during the quest, they do not drop bones or give experience in player-owned houses. They are noticeably much smaller than other dragons. They were originally only small outside of challenge mode, but as of an update they are always small.

One also appears in the Wise Old Man's house during Love Story. Zenevivia redecorated the house adding a dungeon full of traps, as well as many pit creatures to guard the dungeon. It will always drop dragon bones during the quest and never drop anything else.