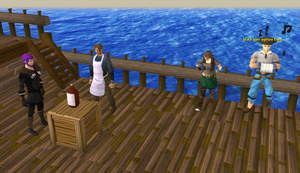 And ye got a job from Wydin. 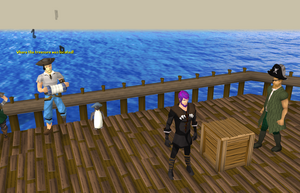 Where the treasure were located!

This song can be listened to by players who've completed Pirate's Treasure. It is performed by Bard Roberts and the Stanky Penguins. As with all of Robert's songs, it is composed of 4 limericks (AABBA rhyme system) that provide a synopsis of the quest along with a cutscene involving:

It also features a crate and Karamjan rum, and the player digging with a spade.

In the middle of the song, Stanky Morgan said "Arrr, that don't rhyme," (saying that "sultanas" and "bananas" don't rhyme with "Karamja") but Bard Roberts said "Ah, shut it, you," and the song continues.

Oh, Frank's love of o'erproof rum,
Proved to be quite the conundrum,
'Cause those custom sorts,
Banned it from exports,
So poor Frank was sober 'n' glum!

In a crate filled up with 'nanas,
But devoid of all sultanas,
The rum ye concealed,
And the crate ye sealed,
And smuggled it off Karamja!

Well, ye sailed back to Port Sarim,
And ye got a job from Wydin.
With yer apron ties,
Ye reclaimed yer prize,
From the crate it got dropped off in!

With his rum, Frank were elated,
His alcohol cravings sated.
He showed ye the mark,
In Falador Park,
Where the treasure were located!