Pirate's Treasure is a quest in which you help the pirate Redbeard Frank obtain some Karamjan rum in return for the location of the treasure of One-Eyed Hector, his old captain.

Redbeard Frank outside the Rusty Anchor.

Talk to Redbeard Frank, located just outside The Rusty Anchor pub in Port Sarim. Ask him about where to find some treasure, and he will say that he knows of some, but will only tell you about it if you get him some karamjan rum.

Agree to help Frank, who will tell you where to acquire the rum he seeks: Musa Point. Walk down south on the docks to see three sailors, Captain Tobias, Seaman Lorris, and Seaman Thresnor. Talk to any one of these sailors to board the ship to Karamja for 30 coins (or for free if you have an activated ring of charos).

On Karamja, make your way west towards the bar, marked by a beer glass icon on your map. Trade with the bartender, and buy one karamjan rum for 30 coins.

Do not leave the island yet; if you do, the customs officer will take your rum away, since Asgarnia has banned the import of intoxicating spirits. Do not try to teleport off the island with the rum either, because the bottle will break in the process.

Since you cannot leave the island without losing the rum, you must smuggle it off of Karamja. Head back east towards the pier, and go to the small house north-east of the pub. Speak to Luthas and ask him about the customs officer, and then ask him for a job. He'll want you to fill a crate of bananas outside his store. Agree to help him. Walk outside his store and then go west past the bar, then north into the banana plantation. Click on the banana trees to obtain bananas; you'll need 10. 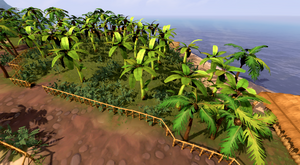 Go back to Luthas' house; on the right side of the house's entrance is a wooden crate. First, use your rum with the crate, then right click on the crate and choose "Fill Crate" to hide the rum with the bananas. Finally, speak to Luthas to get your payment.

Now return to Port Sarim, either by using the lodestone or by taking the boat. To use the boat, speak to the customs officer. Let her search you, then pay 30 coins to go back to Port Sarim.

At Port Sarim, head for Gerrant's Fishy Business to the west, and grab the white apron off the north wall if you do not have one already. Put on the apron and enter Wydin's Food Store just to the south. Try to enter the door that leads towards the back of the store. Wydin will tell you only employees can go there. Ask to work for him, and if you have your white apron on, he'll agree. Now enter the room and search the crate with the banana on top to get the rum.

Go back and give the rum to Redbeard Frank. He'll talk about his old captain, One-Eyed Hector, who died about a year ago. He will then give you a key to a chest that is located in the Blue Moon Inn in Varrock, saying that he believes the treasure may be there. The inn is just north of the Varrock lodestone; enter the inn and go up the stairs. Look in the south-west room for a chest. Open it to obtain a pirate message. It will give you a clue to the treasure's location: 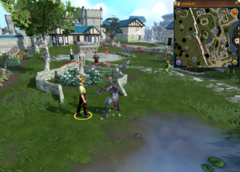 The place where you dig for treasure to finish Pirate's Treasure

Head to Falador park and stand in the middle of the patch of stone to the west of the Saradomin statue (pictured left). Dig on the spot by right-clicking the pirate message (or using a spade if you have lost the message), and you will be interrupted by an angry gardener. Kill him or walk away and dig again in the same spot to get One-Eyed Hector's treasure chest. You must now simply open the chest and claim your reward! 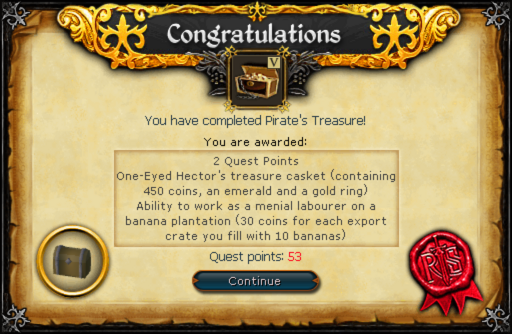 Pirate's Treasure is directly required for the following quests/miniquests: