From the RuneScape Wiki, the wiki for all things RuneScape
Jump to navigation Jump to search
The Old School RuneScape Wiki also has an article on: osrsw:Pinball 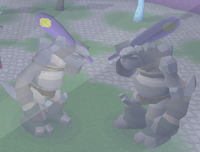 Pinball was a random event, released on 22 May 2006 and removed on 24 October 2012, where the player was transported by the Mysterious Old Man to a strange room with five pillars, each with one rune on top, and two trolls wielding large clubs.

The objective of the game was to tag each pillar that had glowing rings around it. This scored the player one point. After they scored ten points they were free to leave through the exit. If a pillar that didn't have the glowing rings around it was tagged, the score was reset to zero and the player must have tried again. The five pillars contained five spinning tops with fire, water, earth, air, and nature runes respectively.

If the player tried to leave before they reached ten points, they would be teleported in front of the two trolls, Tilt and Flippa, who knocked the player back onto the pillars, dealing a small amount of damage. This was adjusted by Jagex upon complaints such that the trolls no longer dealt actual damage to players. If the trolls accidentally knocked the player to the correct pillar, the game would indicate the player hit the wrong pillar and score was reset.

Once players manage to complete the game they are transported back to where they were taken from and rewarded with a random event gift. The music tune Pinball Wizard, is also unlocked (see list of music).

This random event was themed on Pinball, an arcade game. Overlaying the window is a protective screen of glass, analogous to the real life game. The trolls were named after features of the machine - "tilt" is when players cheat by physically moving the machine to steer the ball (and the mechanism that detects this), and the two flippers are used to deflect the ball back into the playing field when it rolls out of play (see also glossary of pinball terms).

The tune unlocked in this random event was named after Pinball Wizard, a song by The Who.

The clubs Tilt and Flippa wielded represented the flippers used in Pinball.

This information has been compiled as part of the update history project. Some updates may not be included - see here for how to help out!
Retrieved from ‘https://runescape.wiki/w/Pinball?oldid=35680370’
Categories:
Hidden category: