Pig Pits are locations containing pigs. They are unlocked after completion of Bringing Home the Bacon.

In Bringing Home the Bacon, an adventurer assisted Eli Bacon in raising awareness of the usefulness of pigs. During this task, bacon addicts (crazed by Eli's discovery of the delectable meat) forced Eli to hide his pigs underground in a cellar. After successfully promoting the pigs, people came to Eli to buy breeding pigs, and seeing the pigs underground, figured that was the best way to raise them. 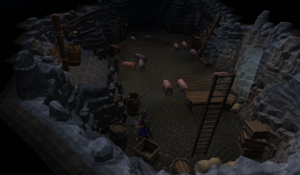