From the RuneScape Wiki, the wiki for all things RuneScape
Jump to navigation Jump to search
Loading...
Beast of BurdenPrayerCombat 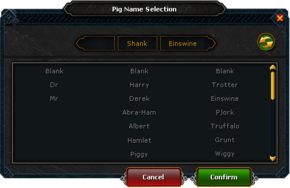 Pigs are a type of pet that is obtained during Bringing Home the Bacon. They are the children of Pigzilla, and before becoming pets they are known as Pigzilla pigs.

Their names can be customised by talking to Martin the Master Gardener in Draynor, and their appearances can be swapped among three different varieties by changing the type of the pack pig machine in the storm cellar underneath Falador farm.

If the pig is lost, released, or stored in a menagerie, players may retrieve him from Eli underneath Falador farm.

Any name can be selected from each column to make a variety of combinations. It is not possible to leave all fields blank, nor is it possible to use only a prefix, trying to do either will result in the game message: You cannot do that as your pig would not have a name.