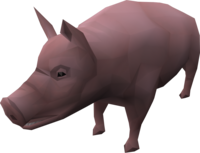 Pigs are large, pink animals kept as livestock by humans. They may be found in a variety of places around Gielinor. They are initially found inside a pen in the farm south of Falador, but after starting Bringing Home the Bacon they are found beneath the farm.

Another pig named Pigzilla can be found in the Group of Advanced Gardeners pen in Draynor Village, overseen by Martin the Master Gardener.

Initially, the concept of eating pigs was largely unknown. Pigs are most commonly used for the ancient sport of ceremonial greased pig wrestling, though the event has been largely superseded by more popular pastimes such as the Duel arena. This placed the species in jeopardy as there is almost no demand. Only Martin the Master Gardener and Eli Bacon raise them; Martin raises them due to the revenue generated from Pigzilla, while Eli inherited his.

During the events of Bringing Home the Bacon, Eli Bacon asks for an adventurer's help in repopulating the pig species. While preparing his signature pig, Gassy Steve, for a pig wrestling contest, the pig was killed and cooked from an accident. Eli initially wanted to bury him, but after several people came by due to the smell, he tried the pig and enjoyed it.

He asks the adventurer to create demand by showing that pigs can be used for other purposes besides wrestling, hoping that once they are popular again, he will be able to introduce the idea of bacon to the general population. The adventurer helps Martin out with a thieving problem and is rewarded one of Pigzilla's piglets. They then bring them to Eli, who created a pig training machine that he designed himself that allows pigs to attack enemies, carry an altar or carry items for people.

The adventurer successfully sells the idea of useful pigs at several major markets. The plan is an apparent success as Eli reports to the adventurer that both he and Martin have been flooded with requests for breeding pigs and pig training equipment. However, as they saw the pigs underground, this prompted the buyers to raise their pigs in the same manner all over Gielinor.

For players only collecting teeth and not raw bacon, area loot can be enabled to make this easier, as teeth can be difficult to see amid all the bacon.

A dead pig roasting on a fire used to be found in Rellekka until it was removed in a hidden update.
Retrieved from ‘https://runescape.wiki/w/Pig?oldid=33825662’
Categories:
Hidden categories: