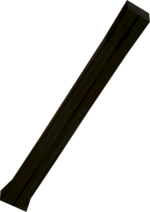 A pickaxe handle was the handle of a pickaxe and a discontinued item from the pickaxe random event.

While players mined, the random event caused the pickaxe head to fly off and land nearby. Players could pick it up and attach it back onto the handle.

Similar to the random event which produced axe heads and axe handles, when a pickaxe head flew off, the handle still stayed equipped and, once removed, could not be re-equipped.