Phoenix is one of a group of roaming firemakers encountered during The Firemaker's Curse. They made their way to a cave near Eagle's Peak after Isis, one of their group, had a vision of firemaking secrets. He considers himself to be the leader of the group.[1] He has a laid back personality, pulling pranks on his fellows,[2] and wishes for the others to gain what they want.[3] He appears to be popular with the other firemakers.[4]

During the quest, they attract the attention of Char. She possesses Emmett, another of the group, and uses him to kill Phoenix. He is the only member of the group who cannot be saved. As such, he cannot appear at the Circus with the others and does not have a flaming poi performance named after him. 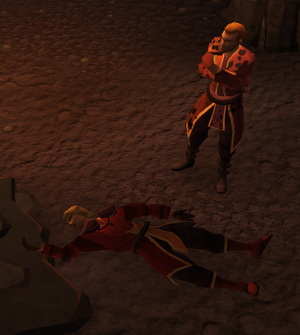