From the RuneScape Wiki, the wiki for all things RuneScape
Jump to: navigation, search
Item JSON: {"edible":"no","disassembly":"no","stackable":"no","stacksinbank":"yes","death":"always","name":"Pestilent journal","bankable":"yes","gemw":false,"equipable":"no","members":"yes","id":"42309","release_date":"12 March 2018","release_update_post":"The Horrors - Shadow Sale - GameBlast Highlights","lendable":"no","destroy":"You can find another undearneath a bush in Mos Le'Harmless. Or in your bookcase.","highalch":false,"weight":5,"lowalch":false,"tradeable":"no","examine":"A grime covered book that looks like a collection of notes.","noteable":"no"}

The pestilent journal can be found in the north-west of Mos Le'Harmless in a jungle plant, located by a tree under the western arm of the T-shaped body of water directly north of the town's main gate. It was written by Herbert Dunwich.

The location of the jungle plant that hides the journal. 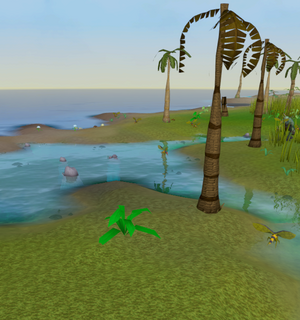 The jungle plant that hides the journal.

The following text is transcluded from Transcript:Pestilent journal.

The Strange Tribes - By Herbert Dunwich

On the superstitiously named Cursed Archipelago resides a small community of primitive ape-like creatures. They are sentient and capable of speech, but only seem to grasp very rudimentary concepts, and at times seem little more than beasts.

Yet what makes them so fascinating is that there are strong indications that they were not always so base. There are carvings, made from a strange black stone, which demonstrate artistic techniques well beyond their current capabilities, and the remnants of their villages indicate that once they lived a more domesticated existence. It fascinates me how a species could fall so far.

They are a brutal, violent people. Each time I try to approach to observe them, they screech and scream and wave their spears at me. Their screams are terrible sounds, a mixture of pitiful wailing and bloodthirsty roars. Each time they did so, I could feel the hair on the back of my neck stand on end and a shiver ran down my spine. I confess that I believe there is something unnatural about them.

I was forced to view them from a distance. It was safer, but it made it far harder to observe their practices fully. Most of their culture was lost to me, taking place as it did in social communes and family circles, though I felt little love between individuals, even families. So, instead, I was forced to study their artwork and their artifice in the brief moments when there were none of them around.

The most interesting pieces of art were the representations of what I presume to be deities.

The first seemed to be some sort of twisted mother deity. The figure was a carving made out of carefully chiselled black stone. It possessed the hints of a woman's body, with the curved figure so often associated with deities of childbirth and fertility. It possessed no arms, and its legs terminated in a great mass of tentacles that knotted around each other as though each tentacle warred with another. Where the head should have been instead rose a great many heads, all growing out of a central column which itself was made of more faces, such that there was no neck, only more faces. It unnerved me.

What snippets of conversation and prayer I was able to overhear from the creatures regarding this figure gave it a name. I believe this deity is referred to as 'Uvhastur'. They pray to her before meals and before they harvest fish from the ocean. Despite their savagery, their fishing methods seem to provide an eerie amount of fish, albeit fish that seem less than appetising.

The second deity appears to be a representation of the moon. A lunar deity is common in primitive cultures, and one that relies so heavily on the sea would doubtless venerate the moon because of its influence on the tides. Yet this carving, again hewn from the same black stone, is a terrible sight. They have decorated it with a silver filigree that could have been enchanting if not for the terrible monstrous eye that sits in the centre. The eye reminds me of the bloated corpses of rotting fish, and every time I see it I find myself convinced that the eye is watching me more than I it.

The creatures seem to fear this deity rather than worship it. Its name is a curse, I believe. Yogsathla, they would spit.

The third deity is perhaps the most unpleasant of their gods. This was less a carving and more an arrangement of carefully cleaned bones. I can only assume these are the bones of one of the larger of their number, skinned and bound together with thick string and sinew. Upon its skull sat a terrible black mask, hewn again from the same black stone. They called it Nyarlahydra, and its name was only whispered when one of their number died.

Each of these figurines was placed around a larger sculpture. At first, I believed that this was simply a decorative stand, but over time I began to realise that it is more than that. The final figure is carved from that same black stone, but is nothing but a writhing mass of grasping hand, clawing their way out of the pool in which it rests. I believe this to be their central deity, the chief god from which all the other pledge their fealty.

A terrible thing. Something about it inspired a primordial dread I could not rid myself of.

But, somehow, I know that that is not its name.

I fear that I know the name somehow. Like an infection of language seeping into my soul from some place other. I dare not write the name, lest you, dear reader, become similarly infected. My books should educate, not endanger. I really want to protect you, dear reader, from this horror.

But then, I wonder, do I really think I can save you.