From the RuneScape Wiki, the wiki for all things RuneScape
Jump to navigation Jump to search
Pestilence? (edit) 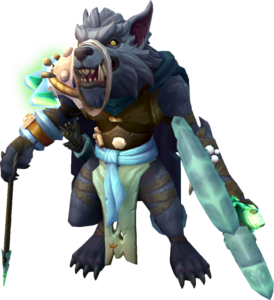 Pestilence, or 'Pest' as his friends call him, is one of the four riders, and one of the five founding members and the medic of The Horsemen clan. He was first mentioned in the 2011 Halloween event and appeared in the 2018, 2020, 2021, and 2022 Halloween Event.

Pestilence is ravaged by disease, which is held at bay by his werewolf physiology. Returning to his human form would kill him within seconds.[1]

Pestilence and Death are not on good terms. Pestilence encountered a skilled adventurer destined for greatness and killed them out of anger at his own curse.[2] This caused Death and Pestilence to fall out, as it was not that adventurer's time.[2] Furthermore, Pestilence feels that Death refuses to help him, despite him coming to Death's aid when called.[3] Death is wary of Pestilence due to the latter's anger issues, which he denies having.[3][4]

The third floor of the Stronghold of Security is named after him.

Using the hints that Pestilence's favourite colour is white, and that he liked undead creatures, players had to help Beauty select a statue of a skeleton to build for him at Death's citadel during Deathcon II. According to Beauty, Pestilence wanted his statue built close to the citadel, but not next to Death's statue, though he did not say why.

'Til Death Do Us Part[edit | edit source]

Pestilence first appeared in the final week of the 2018 Halloween event, where Death summoned him to assist in cleansing the chaotic rift. Pestilence sets up a cauldron of bile from which players may take a vial of bile. It can be equipped to deal with a seeker that may occasionally spawn.