From the RuneScape Wiki, the wiki for all things RuneScape
< Pest Queen
Jump to navigation Jump to search 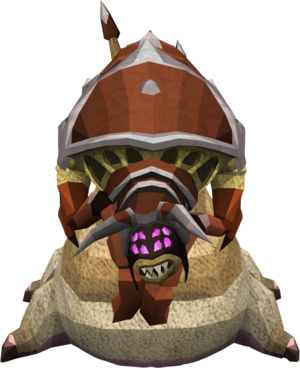 This is probably when the void stares back...

During The Void Stares Back, the main goal in this battle is to prevent the Queen from using her special attack while keeping your rangers alive. The rangers are important because they kill the drones, which heal the Queen. However, the Pest Queen will summon level 130 elite defilers to kill the rangers. Therefore, it is your job to distract the defilers.

Do not kill the defilers or they WILL respawn so as soon they get summoned, go and hit them once to distract them and get them both stuck behind the Queen, then you won't need to think about them for the rest of the fight and they won't do much damage to anyone. Any time you move away from the queen turn protect/deflect magic on.

There can be a maximum of eight rangers present in the battle (two at each corner of the battlefield). When this is achieved, the drones will be killed off rather quickly.

If you use a terrorbird or war tortoise, it will attack the defilers, potentially killing them and forcing you to trap them again. If you make your terrorbird attack the pest queen, it will take immense damage when you are unable to stop the queen from using its special. To prevent either of these scenarios from happening, you need to get your familiar on the opposite side of the pest queen, by frequently calling it. 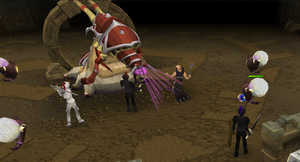 The Queen's magic attack, which is easy to recognise.

Initially, the Queen will constantly be healed by the drones because there will not be enough rangers to kill the drones quickly. This is why it is important to distract the elite defilers (more details in the Offence section), because they are responsible for killing the rangers. As soon as the defilers are distracted, the rangers will accumulate and begin taking down the drones. 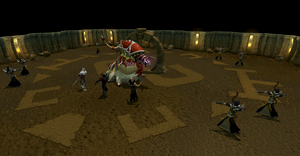 Knights fighting against the Pest Queen.

Korasi's sword is a must in this battle. Its special attack must be used to prevent the queen from using her own special attack, or else she will hit you and most of the NPCs assisting you for about 4000 life points. You do not want to let this happen, because she can also kill the Void rangers, who are extremely valuable in the battle because they are the only ones who can kill the drones (which heal the Queen). If you cannot use the special, it is advised to try and heal from her attack with Resonance (you can tell when the Queen will use her special attack when she stops attacking and rears up making orbs appear around her and the sound of a jet engine is heard), but this strategy is very risky and requires precise timing. Furthermore, if the defilers are attacking you, there is a chance that their attacks may trigger your Resonance and subsequently leave you vulnerable to the Queen's attack. If you are unwilling to risk a mishap, Debilitate and Reflect will both halve her special attack, and Barricade will block it completely.

An abyssal whip or a Chaotic longsword also work well (especially against the Elite defilers, which are weak against slash attacks).

Distract the two defilers as soon as they spawn. The defilers will kill your rangers, who must remain alive. When starting the battle, wait for a ranger to run into the battle, because a defiler will soon appear to attack it. As soon as the defiler spawns, attack it once to get its attention. When the second defiler appears, distract it as well. Afterwards, you can trap the defilers behind the Queen to prevent them from attacking you or the rangers, and you will be able to concentrate on killing the Queen. Be aware that when facing the Queen in the Dominion Tower, this blocking strategy will NOT work, as the defilers will be able to walk and shoot through the queen, and their accurate hits can quickly add up. Therefore, it is advisable to kill them instead. 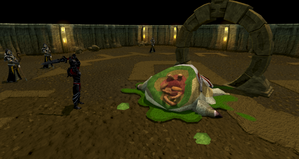 The Queen is dead...

It is possible to hide behind the wall and wait for rangers to enter, then run and kill any defilers as they spawn, return to your hiding position and repeat until there is nearly a whole set of archers on the battlefield. This can reduce damage taken at the start of battle. The queen will charge her special attack as soon as you re-enter the battlefield so some fast clicking will be required for this.

Piety or Turmoil is recommended in this battle. Be sure to bring prayer potions. Soul Split can be counter-productive unless you are using armour with high melee defence and the Penance aura; otherwise, even with extreme potions, the damage caused by the inability to use protection prayers will greatly exceed the amount of health Soul Split heals, particularly if the defilers are attacking you.

For people who think they would be unable to tank the queen's magic and melee attacks side by side, it is a decent strategy to range the queen praying magic. It is recommended to take the best bolts possible to fight her, along with armour with good ranged defence if you wish to tank the defilers instead of kill them.

A good ranged setup can be:

Dual-wielding or the use of two-handed weapons (other than the Dark bow) are not advised due to the queen's high damage output, use only if wearing high defensive armour.

Players are advised to use pack yacks, war tortoises, spirit terrorbirds, or any other beast of burden to store healing supplies and bring a Spirit kyatt along with 100 Spirit Kyatt scroll (Ambush)s or another high damage combat familiar such as a Steel titan with Steel of legend scrolls  so that it can aid in combat after the beast of burden has run out of supplies.

This is a recently discovered method to prevent most of damage from pest queen by extending the battle.

The pest queen will still use her special attack at least once. Right after the player uses disrupt on the queen, immediately cease attack by running away from her. If done correctly the queen will not attack the player again and will not attempt to cast any more special attacks. When this is done, the player should remain stationary and tank both defilers, and let the NPCs whittle the health of queen to a low level. The player can easily kill the queen and then finish off both defilers.

It is recommended to bring the best shield and melee tank armour possible, as this method will cause most of damage taken to be contributed by elite defilers. Put Resonance and possibly Preparation on action bar for easy access, this can help reduce damage taken. Deflect Missiles must not be used.

If you are fighting the Pest Queen in the Dominion Tower, do not bring Korasi's sword, as there will be a sword provided which must be used instead. If you are looking to fight the Pest Queen, doing endurance is recommended as she can appear in rather low waves (6 and up approx). The rest is same as above.

The Pest Queen is immune to all weapons save for Korasi's sword. Attacking her with a different weapon will give the message "You will need Korasi's sword to hurt the pest queen."