From the RuneScape Wiki, the wiki for all things RuneScape
Jump to navigation Jump to search
The Old School RuneScape Wiki also has an article on: osrsw:Pest Control Island
Not to be confused with Void Knights' Outpost. 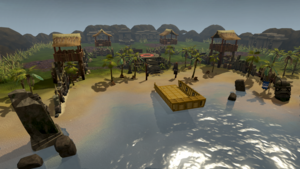 An overview of one of the islands.

The Pest Control Islands are a number of tropical islands found in the Unquiet Ocean that serve as the battlegrounds in which the Pest Control minigame takes place. They are the southernmost known point of Gielinor and can be accessed by the boats at Void Knights' Outpost.

The islands were at one point in control of the goddess Marimbo, likely due to their close proximity to Ape Atoll, but they were abandoned.[1] They were then rediscovered by the mad wizard Melville Grayzag in 149 of the Fifth Age and he began opening portals that spawned many void pests on the islands, which lead to the arrival of the Void Knights. During the Pest Control minigame, players are tasked with destroying all the pest portals around the edge of an island while protecting a Void Knight in the centre of the arena in an attempt to stop the pests from claiming the island.

Some Marimban ruins found to the south of an island. 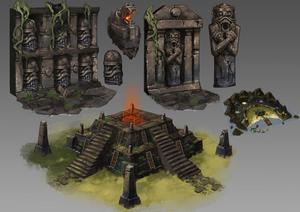 Concept art of the islands.

Outside of the fort, large cliffs surrounded by reeds can be found around all other edges of the islands, preventing access to their beaches. Large stone doorways decorated with murals can be found in the cliffs, and small stone thrones can be found just next to the southern cliffs, both of which possess architecture similar to that found in the Cabbage Facepunch Bonanza arena. Four portals are dotted between the cliffs and the battlements, which is where the pests spawn.