The Sunken Pyramid is a dungeon home to the Order of the Slayer Masters, allowing players to become a Slayer Master. To enter the dungeon, players are required to have level 99 Slayer. Partial completion of The Jack of Spades is also required to reach it. 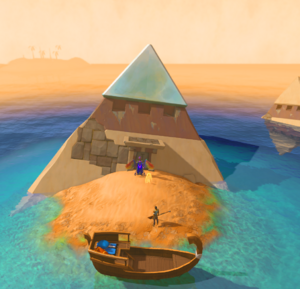 Outside of the Sunken Pyramid

To travel to the pyramid, players may take a boat from Menaphos by speaking to Portmaster Kags on the south-western dock in the Ports district. Portmaster Kags is quickly accessible if their player-owned house is located in Menaphos (requires completion of The Jack of Spades) with House Teleport. If your house is not in Menaphos, two alternative methods include; A Teleport to house tablet after completion of the Love Story quest, or a Port District Teleport . Otherwise, they have to teleport to the Menaphos lodestone and use the tomb transportation to the Ports District.

Players can also teleport there using the Slayer Codex if they have captured at least 50 different monster souls.

There is a Chest of Souls inside the pyramid that when clicked, makes a ghost named Faiza appear. She will inform players that they can become their own slayer master by capturing the soul of slayer monsters, and will provide them with 25-50 ushabti (the player's Slayer level determines the amount given), along with the Slayer Codex to keep track of slayer monsters that the player has captured.

Souls can be captured off or on a task. The chance of obtaining a soul doubles when killing the monster on a slayer task (or when a player is at level 120 Slayer; this does not stack with the on-task bonus). There are a total of 165 monster souls that need to be captured. Players must have an empty ushabti to be able to capture souls from slayer monsters. Players are not required to possess or equip the Slayer Codex in order to capture souls. Capturing a soul rewards a small amount of slayer experience. Souls are automatically captured if eligible when the monster is killed. Monsters killed in the Sunken Pyramid cannot fill an ushabti.

In order to capture all 165 souls, players will need to have 117 Slayer (in addition to other requirements; refer to the monsters' page for other requirements). Although the slayer requirement can be boosted at 111 Slayer via use of wilder pie, players relying on the boost method need to contemplate using many of them, as it can take them a lot of kills for the desired soul.

If a player clicks on the Chest of Souls with any number of filled ushabti in their inventory, all filled ushabti will be added to the Chest and cannot be recovered. Players wishing to add filled ushabti to their slayer dungeon must place them inside of the empty chambers.

The Sunken Pyramid allows players to create a personalized slayer dungeon. Ushabti can be placed in the empty chambers past the Chest of Souls, which creates monster spawns in the dungeon that can be killed for profit and experience. Placing ushabti award Slayer XP and counts towards completion of the Slayer Codex.

The slayer monsters in the personal slayer dungeon will drop most items that are dropped by the same monsters elsewhere in RuneScape, including Champion's scrolls. A unique function of the slayer dungeon is that monsters may occasionally respawn instantly upon death.

The dungeon contains three chambers, each holding up to 5 monsters. The south-eastern room can hold only small monsters, while the two northern rooms hold both large and small monsters. The classification of monsters as small or large is listed at Slayer codex.

To place a monster spawn, enter building mode from the front door of the Sunken Pyramid, then use a filled ushabti on one of the hotspots provided, similar to training Construction in a player-owned house. Each filled ushabti fills one of the five slots in a room. Once confirmed, the monster spawn will be placed in that location.

The slayer creatures can later be removed and the monster spawn will then disappear. Once placed, a spawn cannot normally be moved from one area to another. However, a perk can be bought from any Slayer master for 1,000 slayer points, which allows the spawns to be moved. This is controlled from the Slayer master's Ouija board in the centre of the dungeon.

The dungeon is popular for both money-making and high combat/slayer experience rates, depending on what is in the dungeon.

It can also be used to AFK while killing monsters, often by using an aggression potion, that are difficult or impossible to AFK at their regular locations.

Popular choices include the following:

The following monsters cannot be placed in the dungeon:

For monsters with multiple variants, some monsters always spawn the variant the soul was collected from, but other monsters spawn random variants:

In some cases, not all variants of a monster can spawn:

Restrictions or notes on other monsters:

Much like the player-owned house, players (with 99 Slayer) can visit other players' dungeons, provided that they have a monster in them. The owner does not have to be in the dungeon in order for others to enter; players can enter another's slayer dungeon as long as they are on the same world and have the appropriate friend settings on (set by right-clicking the entrance to the dungeon). Ironman accounts are unable to use other players' dungeons, but an ironman player's dungeon can be used by regular accounts.