From the RuneScape Wiki, the wiki for all things RuneScape
Jump to: navigation, search
The Old School RuneScape Wiki also has an article on: osrsw:Pentyn

Pentyn is an elderly knight trapped in Enakhra's Temple. He was part of a group of Avarrockan knights sent to slay Enakhra and destroy her temple.[1] However, they failed, and the other knights were slain, Pentyn being kept alive and imprisoned in order to bind Akthanakos, powering the blood sphere. Enakhra tortured him, wounding him and starving him.[2]

During Enakhra's Lament, he is discovered by an adventurer, who he begs for food. However, he is a very fussy eater, only accepting a baked potato with topping, a pizza, a bread or a whole cake, as they remind him of his family. He helps the adventurer deal with the other rooms in the temple. 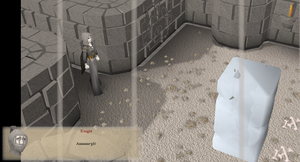