From the RuneScape Wiki, the wiki for all things RuneScape
(Redirected from Penance queen)
Jump to navigation Jump to search
"PQ" redirects here. For the boss in The Void Stares Back, see Pest Queen.
The Old School RuneScape Wiki also has an article on: osrsw:Penance Queen

The Penance Queen is the boss monster of the Barbarian Assault minigame. She is a Chthonian demon, and offspring of the Duke Cacus.

Upon defeating her, players will receive 80 Honour Points in their chosen class, as well as 5 points in all other classes. Also, players may now receive trade items from Commander Connad on the ground floor[UK]1st floor[US] of the Barbarian Assault building. Previously, this was not the case.

Since the Queen is located within a "safe" minigame, you will not lose any items if you die when fighting her, though you will have to restart the wave.

The Queen cannont be directly attacked, instead, she has to be damaged by launching her Omega eggs using an Egg launcher.

She uses ranged and melee attacks in rapid succession, both of which can hit up to 652. Her ranged attacks simultaneously strike all players fighting her.

Protection prayers and food may not be used whilst fighting her, so in order to reduce incoming damage and take preassure off the healers, other methods of damage mitigation and healing should be used, such as defensive abilities, equipment with passive effects, and weapon with special attacks, which can be used on Queen Spawn. Some useful equipment and abilities include: 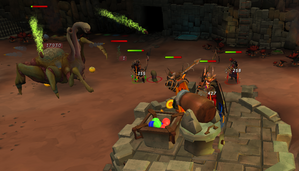 The CHAD system must be used to defeat her, it goes as follows: 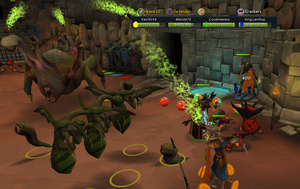 A team of players battling the Penance Queen.

Spam Method: The collector picks up one yellow egg and passes it through the process, producing one Omega egg. Once the single egg is finished, the collector stands by the loader while the other team members click on the cannon and spam the option for the Omega egg, loading the cannon once all teammates are confirmed to be spamming the cannon. If done correctly, the queen should die from one Omega egg only. This method can possibly speed up this wave very quickly. (Note: The leader of the party cannot spam the cannon due to a glitch in this method, so it is actually advantageous for the leader to be the collector so that 4 people can spam the cannon instead of 3.)

If killing the queen using the regular CHAD method; it will take 8 eggs to kill the queen. Each egg will deal 17,930 life points of damage each. 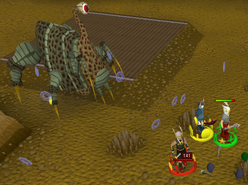 The Penance Queen's ranged attack before the rework. 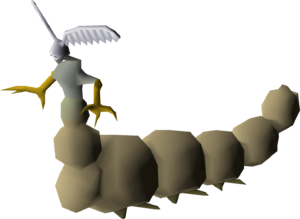