From the RuneScape Wiki, the wiki for all things RuneScape
Jump to: navigation, search
The Old School RuneScape Wiki also has an article on: osrsw:Penance Healer
For the pet version of this monster, see Repentant horror. 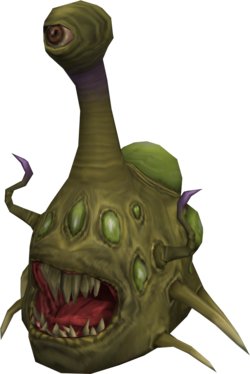 Penance Healers are creatures only encountered during the Barbarian Assault minigame. Their role consists of two objectives:

Penance healers can only be killed with poisoned foods, or by firing the Egg Launcher at them. When the correct piece of poisoned food is used on a Penance healer, it will poison it, starting at about 1/6 of its maximum life points. The Healer can continue to feed the Penance healer poisoned food to damage it. Each correct piece of food causes the same damage to the Penance healer, and resets its poison damage. The Healer does not need to wait for the initial poison to stop hitting; this can easily speed up the process of killing the penance healers. It will take at least 7 pieces of poisoned food to kill them this way, as they always have a very small amount of life points left after the first six hits. This is made more viable after the Barbarian Assault rework, as healers were previously limited by inventory space. As now they can get 50 of each type of stackable poisoned food from the dispenser immediately, they could afford to use them in a more liberal manner.

The food required to kill them changes over time; it is the job of the Defender to inform the Healer of these changes.

In hard mode, these creatures have 70% more life points, and they will move faster when attempting to heal other Penance and will heal them for more life points as well. In addition, their toxic breath will cause more poison damage.

In the Barbarian Assault hall, there is a statue and a plaque that describes them. It says: 'The Penance Healer - This monster could have arguably been called a 'Penance poisoner', for it has a dual role - both healing other Penance and poisoning any creature it sees as a threat. It performs these roles with equal importance and switches from one to the other as soon as it has the chance of finding a target. The best way to stop a Pennace healer is fighting it at its own game. The Penance healer is partial to food, which it uses to create its own chemicals for curing and poisoning. As a result it has to be careful what it eats, and has a mechanism by which it will be immune to certain types of poisonous foods at different times. With this information in mind, it is in fact possible to poison the Penance healer by using the right type of food at the right time.'