From the RuneScape Wiki, the wiki for all things RuneScape
(Redirected from Penance (Race))
Jump to: navigation, search
The Old School RuneScape Wiki also has an article on: osrsw:Penance 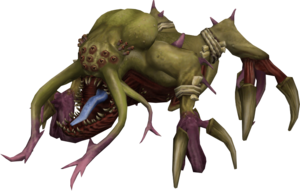 Cacus, a Chthonian demon and leader of the penance.

The Penance are a type of Chthonian demon found within and fought through the minigame Barbarian Assault. They are led by Cacus, who was formerly one of Zaros's twelve demon dukes. Cacus spawned a number of Penance Queens and set his sights on conquering Gielinor some time after Zamorak's rise to godhood at the end of the Second Age, and these queens have in turned spawned the rest of the penance. The name is derived from the Fremennik's belief that the penance were created by the gods as a punishment for man. 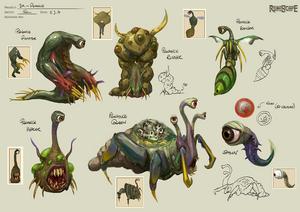 Concept art of the penance

Penance spawned by the Queen begin life as Queen spawn and then later mature into the various kinds of penance. They are instructed on what type to become by orders from Cacus (via the queen). If no orders are received, then the spawn develops into a penance queen as this role is evidently needed.

Penance, including Cacus, are fought in the Barbarian Assault minigame.

Known types of penance include: