From the RuneScape Wiki, the wiki for all things RuneScape
(Redirected from Parure de dragon)
Jump to navigation Jump to search
For trinkets for metallic dragons, see metallic dragon trinkets.
Item JSON: {"edible":"no","disassembly":"no","stackable":"yes","stacksinbank":"yes","death":"alwaysinclwild","name":"Dragon trinkets","bankable":"yes","gemw":false,"equipable":"yes","members":"no","id":"34808","release_date":"15 May 2015","restriction":"microtransaction","release_update_post":"Treasure Hunter – Dragon Trinkets","lendable":"no","destroy":"If you destroy this item you cannot reclaim it. You will have to win more trinkets from Treasure Hunter.","highalch":false,"weight":0,"lowalch":false,"tradeable":"no","examine":"Magical trinkets that give Slayer xp, note items and land a finishing blow when fighting chromatic dragons.","noteable":"no"}

Dragon trinkets are a neck slot item providing a variety of uses related to dragon killing, with a number of trinkets being consumed each time they provide a benefit. Typically multiple trinkets will be received at a time - the item is stackable, and the entire stack may be equipped together.

When worn or in the inventory they will pick up and note Dragon bones and Dragonhide from green, blue, red, and black dragons as well as offer a teleport to their locations. They will also provide slayer experience on kills even when outside of a slayer task and have a 5% chance per hit of instantly killing the Chromatic dragons when their health is above 80%. Note that the King Black Dragon and the Queen Black Dragon cannot be instantly killed.

The trinkets could originally be won from Treasure Hunter between 15 May and 18 May 2015. 75 trinkets were given out to non-ironmen players on login on 15 May. They were also available as a potential prize from the Christmas Advent Calendar and later from Loot piñatas. Dragon trinkets were re-added to Treasure Hunter on 14 April 2016, along with Metallic dragon trinkets for a promotion lasting to 18 April 2016.

All of the automatically triggered abilities (Auto Loot Bones, Auto Loot Hides, Slayer XP and Insta-Kill) can be toggled.

25 Dragon trinkets can be bought from the Elite Dungeon Reward Shop for 25,000 dungeoneering tokens, or from the Marketplace for 100 oddments. 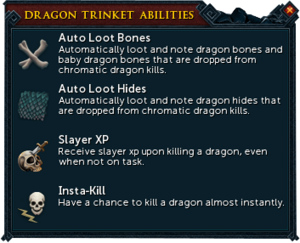 A player instantly kills a dragon using the trinket.

The following table lists the additional Slayer experience gained for each type of dragon killed. The experience is rewarded regardless of whether the dragons are the current Slayer assignment. The experience rates were doubled as a hidden update on 4 April 2016.

It costs 5 trinkets to teleport to any of the following locations: