The party pack is an item available at Solomon's General Store for 9,600 loyalty points. Once bought, it is placed in the player's bank. It can then be placed on the floor, where it will last for an hour before disappearing, or until the next server reset.

Players may then take the following items from it:

Available only to the player who placed the party pack are:

These items cannot be banked or dropped, and upon logging out, they will disappear. With the exception of the cake hat, all items can be reclaimed for as long as the party pack is on the floor. 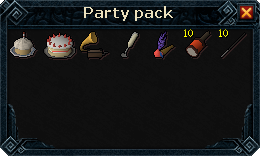 The interface when trying to take items out of the pack.