Party balloons are poppable balloons found in the party room. At regular intervals at certain worlds, party balloons start to descend. Once balloons are popped, lucky players may receive an item from them. During a major drop (the items being dropped in the balloons are expensive) popping balloons may be difficult since many people will be in there hoping to get a valuable item. If there is a balloon drop, various groups of NPCs (Bankers and Guards) will start telling how much the items being dropped in balloons are worth(This no longer exists after the free trade update at 1 February 2011. Also, there will be no more delay once a balloon drop started.). The groups who advertise the party are based on the total value of the party:

Balloons will be dropped in groups of 1, 2, or 3 per square and come in different colours: 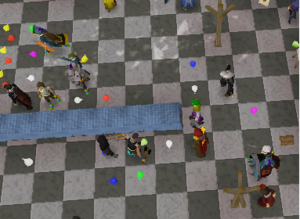 A party in progress.

Party Pete also counts down until the balloon drop. You can also see when the next drop will begin by clicking on the chest and watching the red numbers at the top next to the hourglass. This no longer exists after the free trade update at 1 February 2011.

You can add items for the balloon drop by offering things to the chest from your inventory and pressing "accept". WARNING: When you click accept there are no other warnings and you cannot get your item back!

Party Balloons can also be found at the monastery south of Ardougne after the quest Monk's Friend and after winning a court case in the court house, though these balloons do not give items.

Popping party balloons in the party room can randomly award players with pet versions of the balloon animals found in the prison in ScapeRune:

The update history project is a work-in-progress – not all updates to this topic may be covered below. See here for how to help out!
Retrieved from ‘https://runescape.wiki/w/Party_balloon?oldid=28282069’
Category:
Hidden categories: