Dancing in the Party Room. 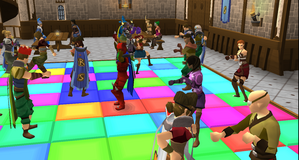 The Partyroom viewed from the flythrough.

The party room can be found in the keep of a clan citadel from tier 3 and above. There is a dance floor, places to sit, and a lever (available from tier 4 onwards) which will drop balloons (with party items such as fireworks and confetti). Unlike the Party Room in Falador, it cannot be used for drop parties.

This party room is unique as players would automatically perform a very long emote which loops while on the dance floor. There is another emote for players running across it.

Black Zabeth plays in the party room. However, once the track ended, it would go back to one of the Citadel tracks.