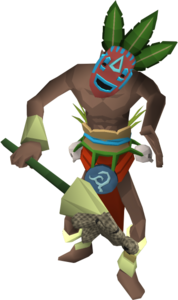 Papa Mambo is the ex-witch doctor of Shilo Village. He manages the Herblore Habitat, which is located to the south of the Jade vine maze, across the river. He was banned from the village for practices of necromancy that were decreed unnatural.

He can provide a number of services for players, including Papa Mambo's Shop, which specialises in Herblore items; building habitats to lure jadinkos; warding off unwanted jadinkos; and converting special jadinko fruits into common fruit.

Papa Mambo may build habitats that are used to lure certain types of jadinkos out into the hunting areas. He will do so for a cost dependent on the Construction level required to build the habitats; the full list may be found here. These habitats can also be built by the player but will require a certain construction level, so paying Mambo to build them may be the optimal route if players cannot build it themselves. The vine-enclosed area south of Papa Mambo's house is the habitat. The plot may only host one type of habitat at a time, so player with a low Construction level may need to pay Papa Mambo for multiple buildings if trying to hunt different types of jadinkos.

A particular jadinko type can be warded off from appearing to the player for a payment of one striped vine for each 15 minutes. Papa Mambo asks for the amount of striped vines to be used, so it is possible to ward off a particular jadinko for an extended period of time. This is typically used to shoo away common jadinko.

Papa Mambo may occasionally appear at the Anachronia Dinosaur Farm on Anachronia, as Papa Mambo (jadinko jailer). He may be sold jadinkos in exchange for beans. As a medium-sized animal buyer, he will appear or renew his order for jadinkos every two days and purchase up to 8 animals before leaving, unless the player is at least 'Master Farmer' rank in the farming reputation system; then he will buy up to 16.